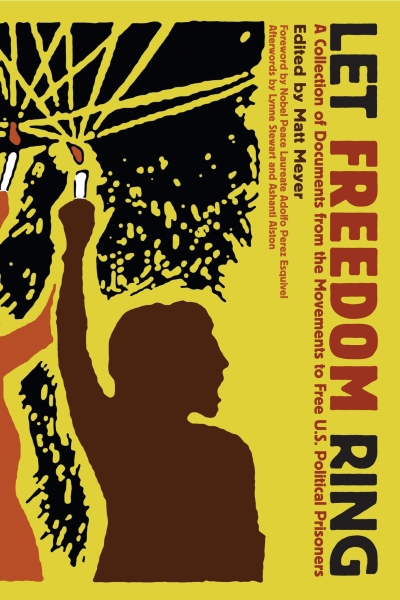 Let Freedom Ring: A Collection of Documents from the Movements to Free U.S. Political Prisoners

Collecting dozens of documents from the past three decades of struggle to free US political prisoners, this resource book is designed for action!

Let Freedom Ring presents a two-decade sweep of essays, analyses, histories, interviews, resolutions, People’s Tribunal verdicts, and poems by and about the scores of U.S. political prisoners and the campaigns to safeguard their rights and secure their freedom. In addition to an extensive section on the campaign to free death-row journalist Mumia Abu-Jamal, represented here are the radical movements that have most challenged the U.S. empire from within: Black Panthers and other Black liberation fighters, Puerto Rican independentistas, Indigenous sovereignty activists, white anti-imperialists, environmental and animal rights militants, Arab and Muslim activists, Iraq war resisters, and others. Contributors in and out of prison detail the repressive methods—from long-term isolation to sensory deprivation to politically inspired parole denial—used to attack these freedom fighters, some still caged after 30+ years. This invaluable resource guide offers inspiring stories of the creative, and sometimes winning, strategies to bring them home.

“Within every society there are people who, at great personal risk and sacrifice, stand up and fight for the most marginalized among us. We call these people of  courage, spirit and love, our heroes and heroines. This book is the story of the ones in our midst. It is the story of the best we are.”  —asha bandele,  poet and author of The Prisoner’s Wife

“This extraordinary volume powerfully and eloquently brings together the voices of so many U.S. political prisoners. Taken one at a time, the stories, poems, communiqués, and analyses are not only heartbreaking in the suffering, courage and indomitable fortitude they manifest, but also paint a clear and damning picture of routine U.S. repression. When read as a whole, this book can do no other than inspire a new generation of activists and revolutionaries to free these prisoners and to bring down this whole wretched system of exploitation, theft, and murder. Thank you to the editors and to the contributors, and thank you most especially to the political prisoners themselves, who are giving their lives and are teaching us by their example how to be free men and women.” —Derrick Jensen, activist and author of How Shall I Live My Life

“As a convicted felon, I have been prevented from visiting many people in prison today. But none of us should be stopped from the vital work of prison abolition and freeing the many who the U.S. holds for political reasons. Let Freedom Ring helps make their voices heard, and presents strategies to help win their release.” —Daniel Berrigan, SJ, former Plowshares political prisoner and member of the FBI Top Ten Wanted List.

Matt Meyer is an educator-activist, based in New York City. Founding PJSA Co-Chair along with USF Dean Jennifer Turpin, Meyer has long worked to bring together academics and activists for lasting social change. A former public draft registration resister and chair of the War Resisters League, he continues to serve as convener of the War Resisters International Africa Working Group. With Bill Sutherland, Meyer authored Guns and Gandhi in Africa: Pan-African Insights on Nonviolence, Armed Struggle and Liberation. He has edited the Fellowship of Reconciliation’s “Puerto Rico: The Cost of Colonialism;” War in Africa and an African Peace; and the forthcoming two-volume Seeds of New Hope: African Peace Studies for the 21st Century.