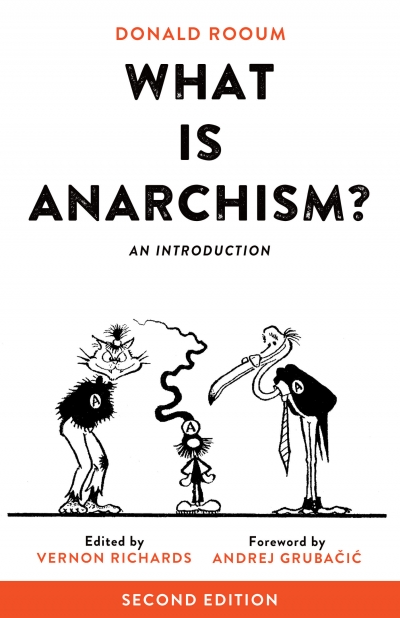 What Is Anarchism?: An Introduction, 2nd Ed.

This book is an introduction to the development of anarchist thought, useful not only to propagandists and proselytizers of anarchism but also to teachers and students, and to all who want to uncover the basic core of anarchism.

Anarchists believe that the point of society is to widen the choices of individuals. Anarchism is opposed to states, armies, slavery, the wages system, the landlord system, prisons, capitalism, bureaucracy, meritocracy, theocracy, revolutionary governments, patriarchy, matriarchy, monarchy, oligarchy, and every other kind of coercive institution. In other words, anarchism opposes government in all its forms.

Enlarged and updated for a modern audience, What Is Anarchism? has the making of a standard reference book. As an introduction to the development of anarchist thought, it will be useful not only to propagandists and proselytizers of anarchism but also to teachers and students of political theory, philosophy, sociology, history, and to all who want to uncover the basic core of anarchism.

Author and Wildcat cartoonist Donald Rooum gives context to the selections with introductions looking at “What Anarchists Believe,” “How Anarchists Differ,” and “What Anarchists Do” and provides helpful and humorous illustrations throughout the book.

Praise:
“What Is Anarchism? is a classic. It brings together a marvellous selection of inspiring texts with a clear, comprehensive introduction—now updated—to provide a brilliant account of the cares, concerns and commitments that animate anarchist politics and activities of British anarchists since 1945.”
—Ruth Kinna, author of Anarchism: A Beginner’s Guide

About the Authors and Editor:
Donald Rooum, born 1928, became an anarchist in 1944 and has contributed articles to the anarchist paper Freedom since 1947. He studied graphic design in Bradford, England, and his cartoons have been published in the British press since 1950. His editorial cartoons have appeared in Peace News since 1962. His strip series “Wildcat” has appeared in Freedom since 1980, and “Sprite” in The Skeptic since 1987. In 1963, he was charged with carrying an offensive weapon, but the prosecuting officer made a mistake in planting the evidence, and in working to save his own skin Donald accidentally initiated the celebrated “Challenor case,” a conspiracy among police officers to discredit nonviolent demonstrators.

Across seven decades, Vernon Richards maintained an anarchist presence in British publishing. His chosen instrument was Freedom Press, based in Whitechapel, in London’s East End. He edited the anarchist paper Freedom—and its prewar and wartime variations—into the 1960s. Earlier, he had been imprisoned in 1945, translated the Italian anarchist Errico Malatesta, and photographed George Orwell.

Andrej Grubacic is the chair of the Anthropology and Social Change department at the California Institute of Integral Studies. His most recent book is Don’t Mourn, Balkanize: Essays after Yugoslavia (2010). Andrej is a member of the International Council of the World Social Forum, the Industrial Workers of the World, and the Global Balkans Network. He is associated with Retort, a group of antinomian writers, artists, artisans, and teachers based in the San Francisco Bay Area.