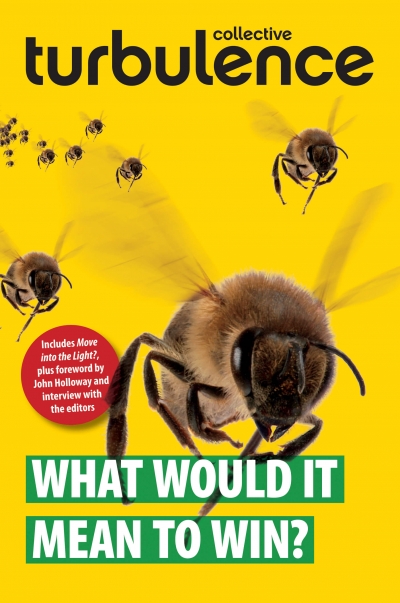 What Would It Mean to Win?

Sometimes all it takes to get moving again is a nudge in a new direction… We think now is a good time to ask the question: What is winning? Or: What would - or could – it mean to “win?”

Product ID: 304 SKU: 9781604861105 Categories: Activism, Books Tags: Ben Trott, David Harvie, David Watts, Kay Summer, Keir Milburn, Michal Osterweil, Rodrigo Nunes, Tadzio Müller, Turbulence Collective
Movements become apparent as “movements” at times of acceleration and expansion. In these heady moments they have fuzzy boundaries, no membership lists–everybody is too engaged in what’s coming next, in creating the new, looking to the horizon. But movements get blocked, they slow down, they cease to move, or continue to move without considering their actual effects. When this happens, they can stifle new developments, suppress the emergence of new forms of politics; or fail to see other possible directions. Many movements just stop functioning as movements. They become those strange political groups of yesteryear, arguing about history as worlds pass by. Sometimes all it takes to get moving again is a nudge in a new direction… We think now is a good time to ask the question: What is winning? Or: What would—or could—it mean to “win”?

This edition includes a foreword by John Holloway and an extended interview with Michal Osterweil and Ben Trott of the Turbulence Collective.

About the Turbulence Collective:

Since 2006, the Turbulence Collective has produced a series of text-based political interventions. Each has focussed on a particular problematic: our ability to measure success, the issue of visibility, the question of how we think about the future. The goal has been less the creation of another new journal or magazine which hopes to offer a ‘snapshot’ of the world’s diverse movements for change, but rather the carving out of a space where the difficult debates and investigations into the political realities of our time can be carried out.

“Turbulence” is the term used to describe the disruption caused by movement through a non-moving element, or an element moving at a different speed. Its unpredictability has posed enormous problems for conventional aerodynamics. Yet in certain contexts it can be tremendously productive: The turbulence produced by the movement of the bumblebee’s tiny wings is the secret to its ability to fly.