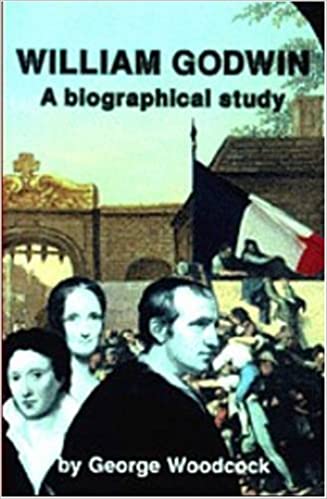 George Woodcock’s timeless biography.
Husband of Mary Wollstonecraft, the father-in-law of Shelley, the friend of Coleridge, William Godwin was, in his own right, an influential writer and thinker.

The almost universal neglect of William Godwin has led to the creation of a completely distorted picture of both his character and his works. He has become known less for his won writings than for his connection with contemporary men and women. He is the husband of Mary Wollstonecraft, the father or Mary Shelley and father-in-law of Percy Shelley, the friend of Coleridge, an amusing character in the essays of Hazlitt and Lamb, and an unpleasant one in the diaries of Crabb Robinson. Unfortunately, his teachings against political parties and other collective activities made him unsympathetic to the majority of socialists and reformers and lesser men acquired a much greater influence in the socialist movement.

John Stuart Mill, H.T. Bucke and Herbert Spencer, who went so far in the same direction as Godwin, made no recognition of the value of his thought. Even the anarchists, whose ideas were nearest to Godwin’s, gave him little acknowledgement, and chose as their prophets Proudhon, Bakuinin, Tolstoy and Kropotkin, whose leading ideas had already been outlined in Godwin’s Political Justice, published February, 1793.

Woodcock’s study of Godwin is timely. An increasing number of people are turning away in disillusionment from the dreary world created by authoritarian or State socialism to discover that there is another and more revolutionary concept of political governing – still largely untried – that of libertarian socialism. Godwin was the first prophet of this social philosophy, and in the years that lie immediately ahead, his name and his message will be reanimated.