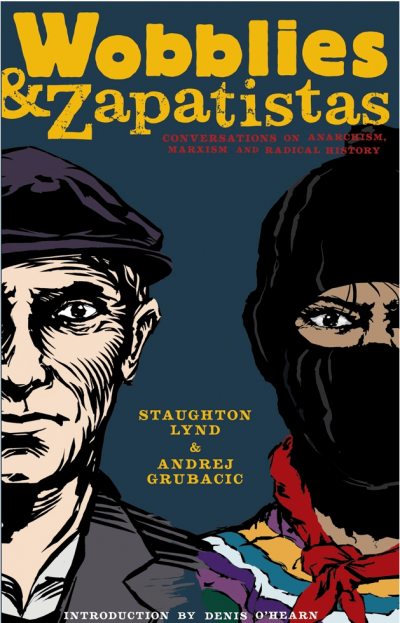 Wobblies and Zapatistas: Conversations on Anarchism, Marxism and Radical History

Wobblies and Zapatistas offers the reader an encounter between two generations and two traditions.

Wobblies and Zapatistas offers the reader an encounter between two generations and two traditions. Andrej Grubacic is an anarchist from the Balkans. Staughton Lynd is a lifelong pacifist, influenced by Marxism. They meet in dialogue in an effort to bring together the anarchist and Marxist traditions, to discuss the writing of history by those who make it, and to remind us of the idea that “my country is the world.” Encompassing a Left-libertarian perspective and an emphatically activist standpoint, these conversations are meant to be read in the clubs and affinity groups of the new Movement.

The authors accompany us on a journey through modern revolutions, direct actions, antiglobalist counter-summits, Freedom Schools, Zapatista cooperatives, Haymarket and Petrograd, Hanoi and Belgrade,  “intentional” communities, wildcat strikes, early Protestant communities, Native American democratic practices, the Workers’ Solidarity Club of Youngstown, occupied factories, self-organized councils and soviets, the lives of forgotten revolutionaries, Quaker meetings, antiwar movements, and prison rebellions. Neglected and forgotten moments of interracial self-activity are brought to light. The book invites the attention of readers who believe that a better world, on the other side of capitalism and state bureaucracy, may indeed be possible.

“There’s no doubt that we’ve lost much of our history. It’s also very clear that those in power in this country like it that way. Here’s a book that shows us why. It demonstrates not only that another world is possible, but that it already exists, has existed, and shows an endless potential to burst through the artificial walls and divisions that currently imprison us. An exquisite contribution to the literature of human freedom, and coming not a moment too soon.”
–David Graeber, author of Fragments of an Anarchist Anthropology and Direct Action: An Ethnography

“In these desperate, often tragic, times, we look backward, forward, even to our dreams to be able to keep imagining a world in which justice may be part of more people’s lives. We look to lives lived before ours, to stories and their meanings, to strategies culled from the worlds of politics or ancient wisdoms. We look in Africa, Asia, Latin America, Europe, and here in the United States. We are willing to entertain any new idea or revamped strategy. Staughton Lynd’s life and work put him in a unique position to seek out someone like Grubacic, ask the pertinent questions, and tell the meaningful stories. Grubacic’s experience perfectly compliments Lynd’s. Here we have the best of a non-dogmatic Marxism listening to a most creative and humane anarchism. But this book is never weighted down by unforgiving theory. Just the opposite: it is a series of conversations where the reader feels fully present. It provides a marvelous framework for enriching the conversation that’s never really stopped: about how we may make this world a better place.”
–Margaret Randall, author of Sandino’s Daughters, When I Look Into the Mirror and See You, and Narrative of Power

“I have been in regular contact with Andrej Grubacic for many years, and have been most impressed by his searching intelligence, broad knowledge, lucid judgment, and penetrating commentary on contemporary affairs and their historical roots. He is an original thinker and dedicated activist, who brings deep understanding and outstanding personal qualities to everything he does.” —Noam Chomsky

Staughton Lynd taught American history at Spelman College and Yale University. He was director of Freedom Schools in the 1964 Mississippi Freedom Summer. An early leader of the movement against the Vietnam War, he was blacklisted and unable to continue as an academic. He then became a lawyer, and in this capacity has assisted rank-and-file workers and prisoners for the past thirty years. He has written, edited, or co-edited with his wife Alice Lynd more than a dozen books.

Andrej Grubacic is a dissident from the Balkans. A radical historian and sociologist, he is the author of Don’t Mourn, Balkanize! Essays after Yugoslavia and the editor of From Here to There: The Staughton Lynd Reader. A fellow traveler of Zapatista-inspired direct action movements, in particular Peoples’ Global Action, and a co-founder of Global Balkans Network and Balkan Z Magazine, he is associate professor in Cultural Anthropology at California Institute of Integral Studies..