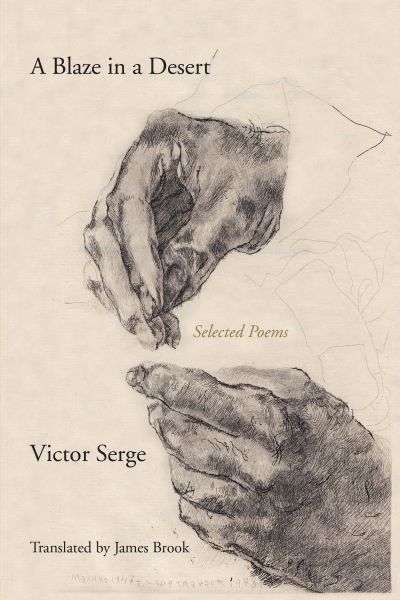 A Blaze in a Desert: Selected Poems, Victor Serge

Like Serge’s extraordinary novels, A Blaze in a Desert: Selected Poems bears witness to decades of revolutionary upheavals in Europe and the advent of totalitarian rule.

Victor Serge (1890–1947) played many parts, as he recounted in his indelible Memoirs of a Revolutionary. The son of anti-czarist exiles in Brussels, Serge was a young anarchist in Paris; a syndicalist rebel in Barcelona; a Bolshevik in Petrograd; a Comintern agent in Central Europe; a comrade of Trotsky’s; a friend of writers like Andrei Bely, Boris Pilnyak, and André Breton; a prisoner of Stalin; a dissident Marxist in exile in Mexico . . .

Like Serge’s extraordinary novels, A Blaze in a Desert: Selected Poems bears witness to decades of revolutionary upheavals in Europe and the advent of totalitarian rule; many of the poems were written during the “immense shipwreck” of Stalin’s ascendancy. In poems datelined Petrograd, Orenburg, Paris, Marseille, the Caribbean, and Mexico, Serge composed elegies for the fallen—as well as prospective elegies for the living who, like him, endured prison, exile, and bitter disappointment in the revolutions of the first half of the twentieth century:

Night falls, the boat pulls in,
stop singing.
Exile relights its captive lamps
on the shore of time.

Throughout A Blaze in a Desert, Serge draws on the heritage of late- and post-Symbolist writers like Verhaeren, Rictus, Apollinaire, Blok, and Bely—themselves authors of messages of a more general resistance by the human spirit—to express the anguish of the failure of the Russian Revolution and to search out glimmers of hope in the ruins of the Second World War.

A Blaze in a Desert comprises Victor Serge’s sole published book of poetry, Resistance (1938), his unpublished manuscript Messages (1946), and his last poem, “Hands” (1947).

About the Contributors:
Victor Serge (1890–1947) was born to Russian anti-Tsarist exiles living in Brussels. As a young anarchist firebrand, he was sentenced to five years in a French penitentiary in 1912. In 1919, Serge joined the Bolsheviks. An outspoken critic of Stalin, he was expelled from the Party and arrested in 1929. Nonetheless, he managed to complete three novels (Men in Prison, Birth of Our Power, and Conquered City) and a history (Year One of the Russian Revolution), published in Paris. Arrested again in Russia and deported to Central Asia in 1933, he was allowed to leave the USSR in 1936 after international protests by militants and prominent writers such as André Gide and Romain Rolland. Hounded by Stalinist agents, Serge lived in precarious exile in Brussels, Paris, Vichy France, and Mexico City, where he died in 1947.

Richard Greeman is the translator of five of Victor Serge’s seven novels: Men in Prison (PM Press), Birth of Our Power (PM Press), Conquered City, Midnight in the Century, and Unforgiving Years. He has published literary, political, and biographical studies of Serge in English, French, Russian, and Spanish and contributed forewords to various editions of Serge’s work, including Anarchists Never Surrender: Essays, Polemics, and Correspondence on Anarchism, 1908–1938.