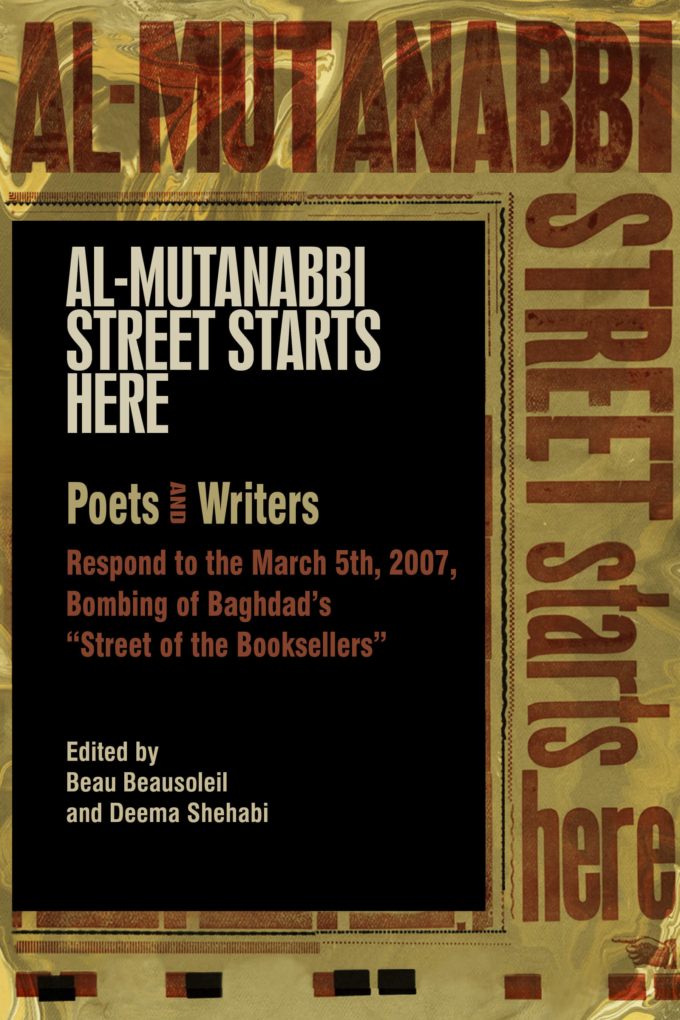 Al-Mutanabbi Street Starts Here: Poets and Writers Respond to the March 5th, 2007, Bombing of Baghdad’s “Street of the Booksellers”

This anthology begins with a historical introduction to al-Mutanabbi Street and includes the writing of Iraqis and international poets and writers who were outraged by the 2007, car bomb attack.

On March 5th, 2007, a car bomb was exploded on al-Mutanabbi Street in Baghdad. More than thirty people were killed and more than one hundred were wounded. This locale is the historic center of Baghdad bookselling, a winding street filled with bookstores and outdoor book stalls. Named after the famed 10th century classical Arab poet al-Mutanabbi, it has been the heart and soul of the Baghdad literary and intellectual community. This anthology begins with a historical introduction to al-Mutanabbi Street and includes the writing of Iraqis as well as a wide swath of international poets and writers who were outraged by this attack.

This book seeks to show where al-Mutanabbi Street starts in all of us: personally, in our communities, and in our nations. It seeks to show the commonality between this small street in Baghdad and our own cultural centers, and why this attack was an attack on us all. This anthology sees al-Mutanabbi Street as a place for the free exchange of ideas; a place that has long offered its sanctuary to the complete spectrum of Iraqi voices. This is where the roots of democracy (in the best sense of that word) took hold many hundreds of years ago. This anthology looks toward al-Mutanabbi Street as an affirmation of all that we hope for in a more just society.

Beau Beausoleil is a poet and bookseller in San Francisco, California. His latest book is Concealed in Language. He is the founder of the Al-Mutanabbi Street Coalition.

Deema Shehabi is the author of Thirteen Departures from the Moon. Her work has appeared in various journals and anthologies including Inclined to Speak: Contemporary Arab-American Poetry, The Kenyon Review, Drunken Boat, Literary Imagination, The Poetry of Arab Women, Poetry Review (London), and Wasafiri. Her work has been nominated for the Pushcart prize four times, and she served as Vice-President for RAWI, the Radius of Arab-American Writers, Inc.

See and hear author interviews, book reviews, and other news on the Author’s Page HERE and HERE