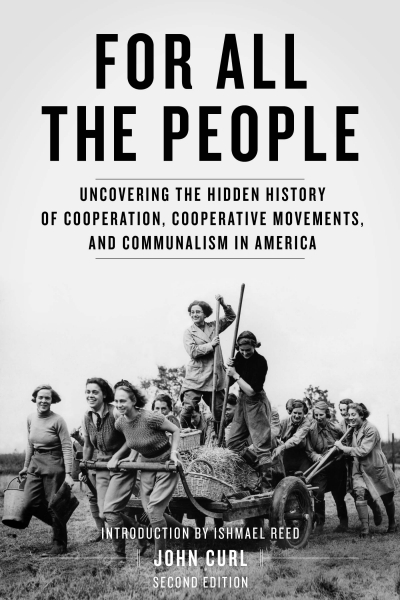 For All the People: Uncovering the Hidden History of Cooperation, Cooperative Movements, and Communalism in America, 2nd Edition

Seeking to reclaim a history that has remained largely ignored by most historians, this dramatic and stirring account examines American cooperative movements for social change that have been all but erased from collective memory.

Seeking to reclaim a history that has remained largely ignored by most historians, this dramatic and stirring account examines each of the definitive American cooperative movements for social change—farmer, union, consumer, and communalist—that have been all but erased from collective memory.

Focusing far beyond one particular era, organization, leader, or form of cooperation, For All the People documents the multigenerational struggle of the American working people for social justice. While the economic system was in its formative years, generation after generation of American working people challenged it by organizing visionary social movements aimed at liberating themselves from what they called wage slavery. Workers substituted a system based on cooperative work and constructed parallel institutions that would supercede the institutions of the wage system.

With an expansive sweep and breathtaking detail, this scholarly yet eminently readable chronicle follows the American worker from the colonial workshop to the modern mass-assembly line, from the family farm to the corporate hierarchy, ultimately painting a vivid panorama of those who built the United States and those who will shape its future.

John Curl, with over forty years of experience as both an active member and scholar of cooperatives, masterfully melds theory, practice, knowledge and analysis, to present the definitive history from below of cooperative America. This second edition contains a new introduction by Ishmael Reed; a new author’s preface discussing cooperatives in the Great Recession of 2008 and their future in the 21st century; and a new chapter on the role co-ops played in the Food Revolution of the 1970s.

About John Curl:
John Curl’s writings include history, memoir, translations of pre-Columbian poetry from indigenous languages, and seven books of poetry. He is a longtime board member of PEN Oakland, chair of West Berkeley Artisans and Industrial Companies, a social activist, and has served as a city planning commissioner. He has been a member of Heartwood Cooperative Woodshop in Berkeley for over thirty years, and has belonged to numerous other cooperatives and collectives. A professional woodworker, he resides in Berkeley, CA.

About Ishmael Reed (introduction):
Ishmael Reed is the author of twenty-five published books and six plays, including nine novels, one opera libretto, six books of poetry, and six books of essays. Novelist, poet, playwright, essayist, and National Book Award nominee, he is also a publisher, editor of numerous anthologies and magazines, television producer, radio and television commentator, teacher and lecturer.