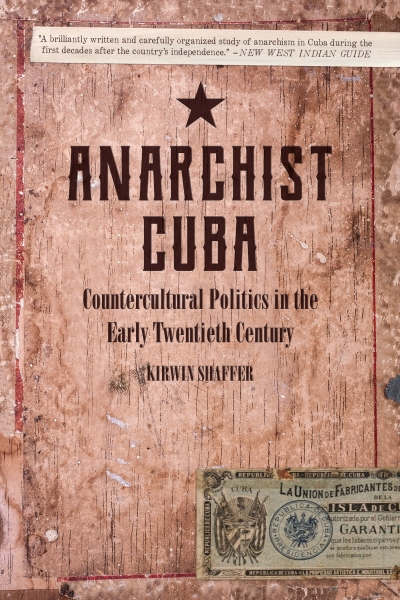 Author: Kirwin Shaffer
This is the first critical, in-depth study of the anarchist movement in Cuba in the three decades after the republic’s independence from Spain in 1898.

This is the first critical, in-depth study of the anarchist movement in Cuba in the three decades after the republic’s independence from Spain in 1898. Kirwin Shaffer shows that anarchists played a significant—until now little-known—role among Cuban leftists in shaping issues of health, education, immigration, the environment, and working-class internationalism. They also criticized the state of racial politics, cultural practices, and the conditions of children and women on the island.

In the chaotic new country, members of the anarchist movement reinterpreted the War for Independence and the revolutionary ideas of patriot José Martí, embarking on a nationwide debate with the larger Cuban establishment about what it meant to be “Cuban.” To counter the dominant culture, the anarchists created their own initiatives—schools, health institutes, vegetarian restaurants, theater and fiction writing groups, and occasional calls for nudism—and as a result they challenged both the existing elite and the occupying U.S. military forces.

Shaffer also focuses on what anarchists did to prepare the masses for a social revolution. While many of the Cuban anarchists’ ideals flowed from Europe, their programs, criticisms, and literature reflected the specifics of Cuban reality and appealed to Cuba’s popular classes. Using theories of working-class internationalism, countercultures, popular culture, and social movements, Shaffer analyzes archival records, pamphlets, newspapers, and novels, showing how the anarchist movement in republican Cuba helped shape the country’s early leftist revolutionary agenda.

Shaffer’s portrait of the conflict between anarchists and their enemies illuminates the multiple forces that pervaded life on the island in the twentieth century, until the rise of the Gerardo Machado dictatorship in the 1920s. This important book places anarchism in its rightful historical role as a vital current within Cuban radical political culture.

About the Author:
Kirwin Shaffer is professor of Latin American studies at Pennsylvania State University–Berks College. He has authored or edited several books on anarchist culture and networks in Cuba and the Caribbean Basin from the 1890s to 1920s, including Black Flag Boricuas: Anarchism, Antiauthoritarianism, and the Left in Puerto Rico, 1897–1921 and In Defiance of Boundaries: Anarchism in Latin American History.