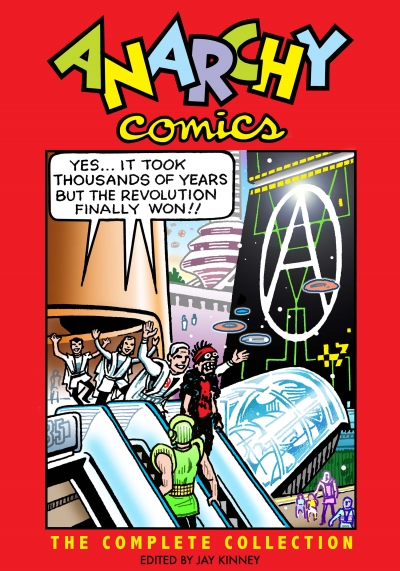 Anarchy Comics: The Complete Collection brings together the legendary four issues of Anarchy Comics (1978-1986), the underground comic that melded anarchist politics with a punk sensibility.

Anarchy Comics: The Complete Collection brings together the legendary four issues of Anarchy Comics (1978-1986), the underground comic that melded anarchist politics with a punk sensibility, producing a riveting mix of satire, revolt, and artistic experimentation. This international anthology collects the comic stories of all thirty contributors from the U.S., Great Britain, France, Germany, Netherlands, Spain, and Canada.

In addition to the complete issues of Anarchy Comics, the anthology features previously unpublished work by Jay Kinney and Sharon Rudahl, along with a detailed introduction by Kinney, which traces the history of the comic he founded and provides entertaining anecdotes about the process of herding an international crowd of anarchistic cats.

Jay Kinney was an active participant in the underground comics movement from 1968 through the ’70s and into the ’80s. He co-founded the romance comic satire, Young Lust, founded and edited Anarchy Comics, and contributed to numerous other comics. He served as editor of Whole Earth’s CoEvolution Quarterly before founding Gnosis: A Journal of the Western Inner Traditions. His other books have included: Hidden Wisdom, The Inner West, and The Masonic Myth. He recently contributed a chapter on the underground comics movement to Ten Years that Shook the City: San Francisco 1968-1978 (City Lights).