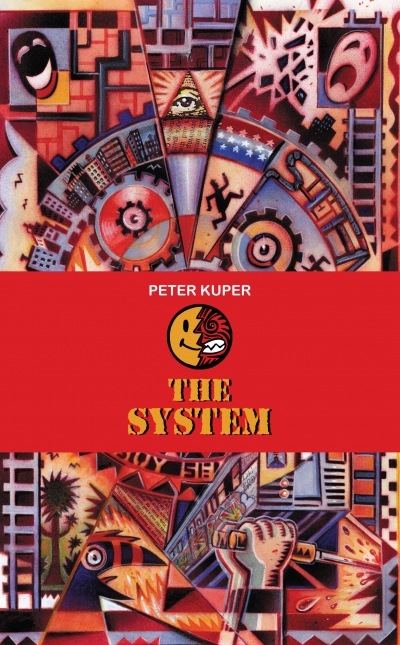 A sleazy stockbroker is lining his pockets. A corrupt cop is shaking down dealers. A mercenary bomber is setting the timer. A serial killer is stalking strippers. A political scandal is about to explode. And nobodyâs talking!

It’s said that the flutter of insect wings in the Indian Ocean can send a hurricane crashing against the shores of the American Northeast. It’s this premise that lies at the core of The System, a wordless graphic novel created and fully painted by award-winning illustrator Peter Kuper. From the subway system to the solar system, human lives are linked by an endless array of interconnecting threads. They tie each of us to our world and it to the universe. If every action has an equal and opposite reaction, get ready to run for cover!

A sleazy stockbroker is lining his pockets. A corrupt cop is shaking down drug dealers. A mercenary bomber is setting the timer. A serial killer is stalking strippers. A political scandal is about to explode. The planet is burning. And nobody’s talking.

Told without captions or dialogue, The System is an astonishing progression of vivid imagery, each brilliantly executed panel containing a wealth of information, with layer upon layer forming a vast and intricate tour of an ominous world of coincidences and consequences.

“Cartooning is an art that can be universally recognized and appreciated. The purest of this form is the wordless comic, where the cartoonist creates a strictly visual language. If done properly, it is capable of displaying a range of ideas and emotions that people all over the world are able to understand. It is comparable to the early days of silent films when actors like Charlie Chaplin and Buster Keaton only had gestures and facial expressions to tell their stories and convey complex feelings. Pantomime cartooning shares this limitation, yet the challenges are even greater. Not only are there no words to lean on, but there is also no movement. Every action and emotion in the story has to be conveyed through static images alone. Over the years there have been a few geniuses in this specialized art form. One of them is Peter Kuper. Long may his pencil, pen and brush silently flow.”
-Al Jaffee, legendary Mad cartoonist

“Though it has no word balloons or thought bubbles, The System is filled with so much urban clatter, you’ll want to seal your windows shut. Kuper uses his trademark spray-paint/stencil art to send us careening through a kinetic New York landscape, jump-cutting from a crooked cop to a stripper, panning from a homeless guy to a cell-phone yuppie. The star of the story is the dark city itself, and the point is how money ties all its occupants—whether they know it or not—together.“
—Gavin Edwards, Details

“Like a slow-motion footage of a .45 slug drifting through a gun barrel, Peter Kuper’s The System gives urban tragedy an almost graceful inevitability. The System intertwines the lives of several instantly identifiable New York City archetypes (drunken subway motormen and drug-dealing beat cops) into a dreamily suspenseful tale of corruption and ambition. Somehow Kuper orchestrates this Robert Altman-esque black comedy without any dialogue, utilizing his signature color-stencil-art style to depict a class-conscious saga superior in depth and emotion to a year’s stockpile of the New York Post.“
—Robert Morales, Vibe

“This is our world, folks, as it exists right now, teetering on the brink of something we can’t quite imagine, laid out by Peter Kuper as a flow chart of parallels and coincidences and connecting fibers so powerful and occult that a pin dropped in a back street creates shock waves that make skyscrapers tremble. The System is a silent epic in the tradition of Fritz Lang’s Dr. Mabuse and Lynd Ward’s Gods’ Man—paranoid, yes, and with good reason.
—Luc Sante, author, Low Life

About Peter Kuper:
Peter Kuper is a cofounder of World War 3 Illustrated. His illustrations and comics have been featured in Time, The New York Times, and MAD Magazine, for which he has written and illustrated SPY vs SPY since 1997. He has produced over 20 books including The System, a Will Eisner Comic Industry Award Nominee, Drawn to New York: An Illustrated Chronicle of Three Decades in New York City, and Diario De Oaxaca, a visual journal of two years in Mexico. He was the 2009 gold medal recipient at the Society of Illustrators for sequential art.

About Calvin Reid:
Calvin Reid is a contributing editor for Publishers Weekly and is also the head of its comics department. He heads the magazine’s annual African American issue, and coedits its online comics newsletter, PW Comics Week.