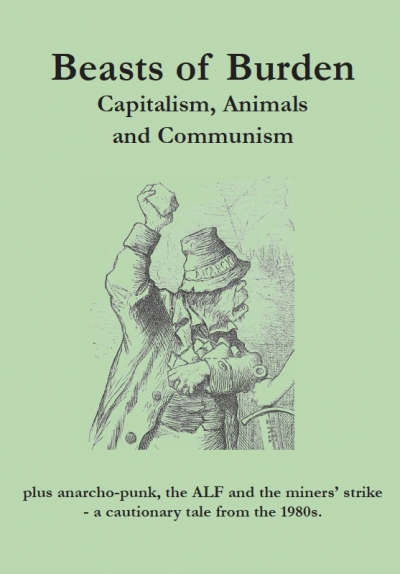 The aim of the anonymous pamphlet is to initiate a debate between animal liberationists and revolutionaries.

Beasts of Burden was first published in October 1999. The aim of the anonymous pamphlet was to initiate a debate between animal liberationists and revolutionaries – anarchists and communists. (The author uses the term ‘communist’ repeatedly and means communism in its original sense: a stateless and classless society where people live together and “the free development of each is the condition for the free development of all.”)

The debate never took place and the pamphlet was all but ignored by both camps. Perhaps the timing of its publication had something to do with that. 1999-2000 was a period of frantic activity for both the animal liberation and the anti-capitalist movements. Instead of attention being focussed inwardly it was directed towards struggles on the streets. Now, however, may be a more appropriate opportunity for some sort of dialogue.

If we still believe in the politics of hope – in building a just, egalitarian world based upon human beings living harmoniously with nature – then it is more important than ever that we build bridges with like-minded groups and individuals. It is to be hoped that the republication of this ground-breaking pamphlet will go some way towards doing that.

Here reissued as a small format pocketbook (roughly A6 size) with a new introduction.