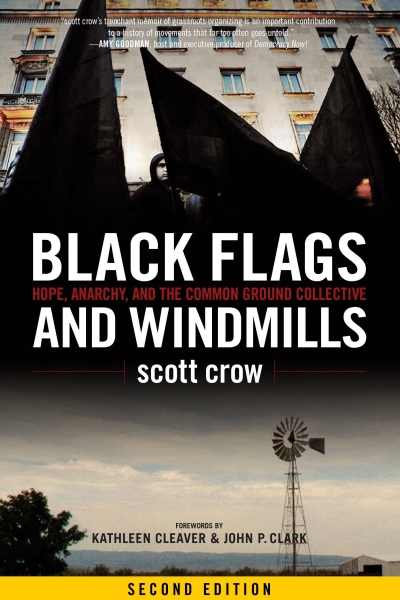 A memoir of resisting indifference, rebuilding hope amid collapse, and struggling against the grain. This edition includes new discussions on disaster relief; infiltration and surveillance from the State; and new photos.

When both levees and governments failed in New Orleans after Hurricane Katrina, the anarchist-inspired Common Ground Collective was created to fill the void. With the motto of “Solidarity Not Charity,” they worked to create power from below—building autonomous projects, programs, and spaces of self-sufficiency like health clinics and neighborhood assemblies, while also supporting communities defending themselves from white militias and police brutality, illegal home demolitions, and evictions.

Black Flags and Windmills—equal parts memoir, history, and organizing philosophy—vividly intertwines Common Ground cofounder scott crow’s experiences and ideas with Katrina’s reality, illustrating how people can build local grassroots power for collective liberation. It is a story of resisting indifference, rebuilding hope amid collapse, and struggling against the grain to create better worlds.

The expanded second edition includes up-to-date interviews and discussions between crow and some of today’s most articulate and influential activists and organizers on topics ranging from grassroots disaster relief efforts (both economic and environmental); dealing with infiltration, interrogation, and surveillance from the State; and a new photo section that vividly portrays scott’s experiences as an anarchist, activist, and movement organizer in today’s world.

scott crow is an Austin, TX-based anarchist community organizer, writer, and trainer who began working on anti-apartheid, international political prisoner and animal rights issues in the mid-1980s. He is the co-founder and co-organizer of several social justice groups and education projects throughout Texas and the South including Common Ground Collective (with Malik Rahim), Radical Encuentro Camp, UPROAR (United People Resisting Oppression and Racism), Dirty South Earth First!, and North Texas Coalition for a Just Peace. He has trained and organized for Greenpeace, Ruckus Society, Rainforest Action Network, ACORN, Forest Ethics, and Ralph Nader, and many smaller grassroots groups. He is currently collaborating on sustainable, democratic, economic mutual aid projects within Austin.

John P. Clark is an eco-communitarian anarchist theorist and activist. He lives and works in New Orleans, where his family has been for twelve generations. He is the author or editor of a dozen books, most recently The Impossible Community: Realizing Communitarian Anarchism (Continuum Books).