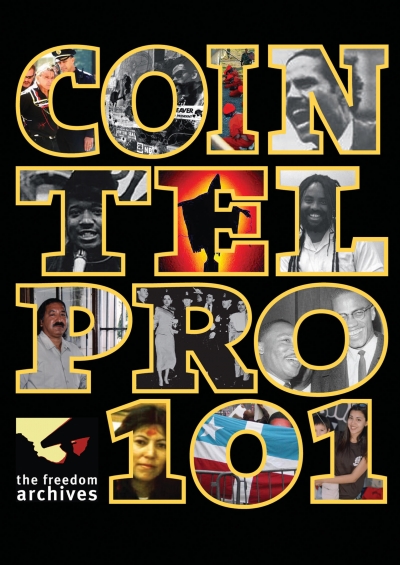 Freedom Archives
This DVD exposes illegal surveillance, disruption, and outright murder committed by the U.S. government in the 1950s, ’60s, and ’70s.

COINTELPRO 101 exposes illegal surveillance, disruption, and outright murder committed by the U.S. government in the 1950s, 60s, and 70s. “COINTELPRO” refers to the official FBI COunter INTELligence PROgram carried out to surveil, imprison, and eliminate leaders of social justice movements and to disrupt, divide, and destroy the movements as well. Many of the government’s crimes are still unknown. Through interviews with activists who experienced these abuses first-hand and with rare historical footage, the film provides an educational introduction to a period of intense repression and draws relevant lessons for present and future movements.

Interviews in the video include:

Subtitles in Spanish by Tlaxcala, the international network of translators for linguistic diversity.

“COINTELPRO 101 is a riveting recall of history for anyone who wants to be inspired to work toward an end to the U.S. practice of terrorism. Because it was not then; it is happening still in America!”  —Lenore Daniels, Black Commentator

“Strong interviews, rarely seen clips, high quality audio and video production with equally strong narration… But it is the film’s ability to force new confrontation with the political reality of today, as much as with the past, that truly demonstrates its value. The simple point made by Geronimo Pratt is also its strongest; that COINTELPRO made official the illegality of politics, the ‘criminalization of positions’ represented by its targets.”  —Jared Ball, Black Agenda Radio

“Cointelpro 101 is a well made and appealing primer on the history of the U.S. police state. Produced, written, and directed by individuals who have themselves been the target of tactics documented in the film, it has an authenticity and immediacy that pulls the viewer in.” —Ron Jacobs, CounterPunch

About the Freedom Archives:

The Freedom Archives contains over 10,000 hours of audio and video tapes. These recordings date from the late-60s to the mid-90s and chronicle the progressive history of the Bay Area, the United States, and international solidarity movements. The collection includes weekly news, poetry, and music programs broadcast on several educational radio stations; in-depth interviews and reports on social and cultural issues; diverse activist voices; and an extensive La Raza collection.