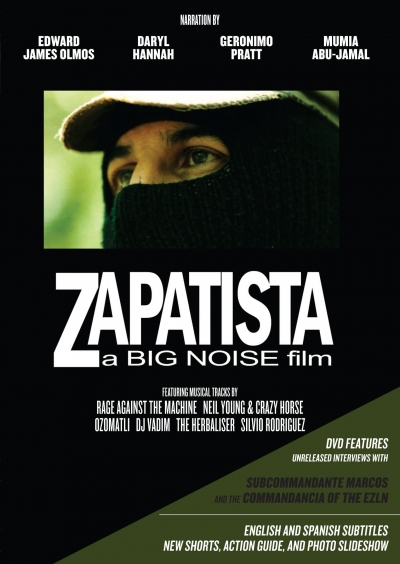 Big Noise Films
With exclusive access and interviews with Subcomandante Marcos, Noam Chomsky and others, Zapatista is the definitive look at the Zapatista uprising, its historical roots and its lessons for the present and the future.

About the Film:
January 1, 1994. The day the North American Free Trade Agreement (NAFTA) comes into effect. A few minutes after midnight in Southeastern Mexico, several thousand Mayan soldiers take over half the state of Chiapas, declaring a war against the global corporate power they say rules Mexico. They call themselves the Zapatista National Liberation Army (EZLN).

Zapatista is the definitive look at the uprising in Chiapas. It is the story of a Mayan peasant rebellion armed with sticks and their word against a first world military. It is the story of a global movement that has fought 175,000 federal troops to a stand still and transformed Mexican and international political culture forever.

Music by Rage Against the Machine.

About the Producers:
Big Noise Tactical Media is a collective of media-makers dedicated to circulating beautiful, passionate, revolutionary images.