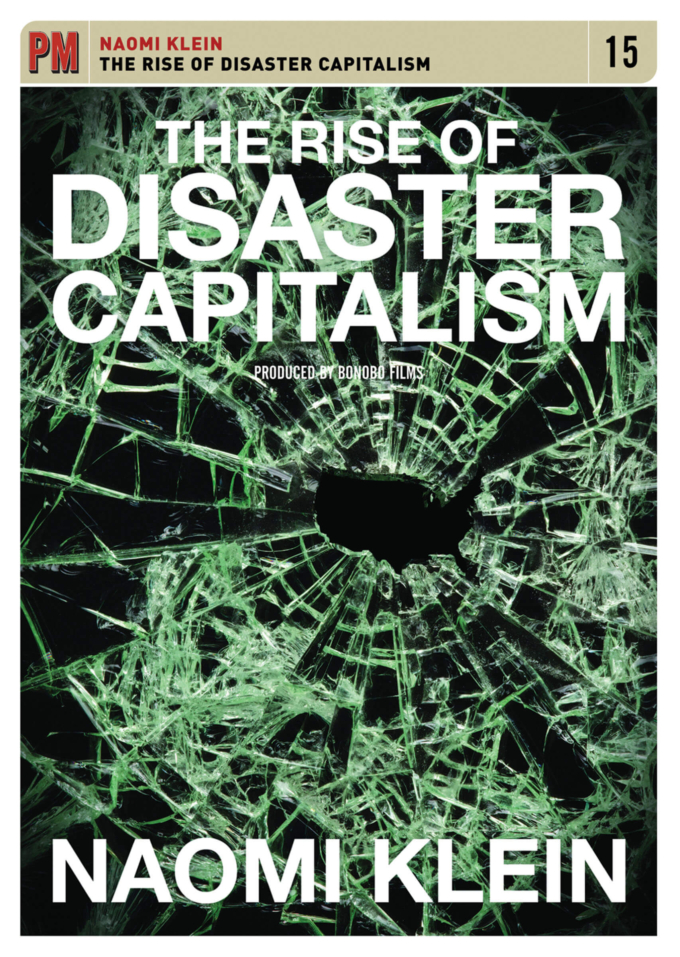 The Rise of Disaster Capitalism (DVD)

Naomi Klein
This riveting hour-long lecture and interview explains the ideas and research behind Naomi Klein’s book that exposed the popular myth of the free market economy’s peaceful global victory.

Around the world there are people with power who are cashing in on chaos, exploiting bloodshed and catastrophe to brutally implement their policies. They are the shock doctors. From Chile in 1973 to Iraq today, this is the chilling tale of how a few are making a killing while more are getting killed.

The author’s portion of the proceeds from the sale of the DVD are going to the UK non-profit organization War on Want.

“Naomi Klein’s exposé of neo-liberal economics is certain to be sensational. She rips away the ‘free trade’ and globalization ideologies that disguise a conspiracy to privatize war and disaster and grab public property for the rich few. She is brilliant on the malevolent influence of Milton Friedman and the University of Chicago’s Economics Department in promoting global privatization. She offers an excellent explanation for the failure to repair New Orleans after Katrina. Hers is a long-needed analysis of our headlong flight back to feudalism under the guise of social science and ‘freedom.’”
–Chalmers Johnson, author of the Blowback Trilogy (on the book)

“Naomi Klein is an investigative reporter like no other. She roams the continents with eyes wide open and her brain operating at full speed, finding connections we never thought of, and patterns which eluded us. She shows us, in clear and elegant language, how catastrophes–natural ones like Katrina, unnatural ones like war–become opportunities for a savage capitalism, calling itself ‘the free market,’ to privatize everything in sight, bringing huge profits to some, misery for others. To ensure the safety of such a system, it becomes necessary to constrict freedom, to assault human rights. The torture chambers for some then match the torturing of the larger society.”
–Howard Zinn, author of A People’s History of the United States (on the book)

About Naomi Klein:
Naomi Klein is an award-winning journalist, syndicated columnist and author of the international bestseller, The Shock Doctrine: The Rise of Disaster Capitalism. Her first book No Logo: Taking Aim at the Brand Bullies was also an international bestseller, translated into over 28 languages with more than a million copies in print.