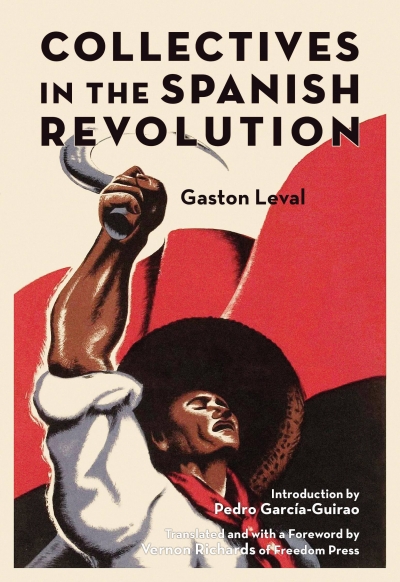 Collectives in the Spanish Revolution

by Gaston Leval • Translation and Foreword by Vernon Richards
A unique account of worker-run collectives in Revolutionary Spain combining eyewitness documentation with keen analysis of a unique historical moment.

Revolutionary Spain came about with an explosion of social change so advanced and sweeping that it remains widely studied as one of the foremost experiments in worker self-management in history. At the heart of this vast foray into toppling entrenched forms of domination and centralised control was the flourishing of an array of worker-run collectives in industry, agriculture, public services, and beyond.

Collectives in the Spanish Revolution is a unique account of this transformative process—a work combining impeccable research and analysis with lucid reportage. Its author, Gaston Leval, was not only a participant in the Revolution and a dedicated anarcho-syndicalist but an especially knowledgeable eyewitness to the many industrial and agrarian collectives. In documenting the collectives’ organisation and how they improved working conditions and increased output, Leval also gave voice to the workers who made them, recording their stories and experiences. At the same time, Leval did not shy away from exploring some of the collectives’ failings, often ignored in other accounts of the period, opening space for readers today to critically draw lessons from the Spanish experience with self-managed collectives.

The book opens with an insightful examination of pre-revolutionary economic conditions in Spain that gave rise to the worker and peasant initiatives Leval documents and analyses in the bulk of his study. He begins by surveying agrarian collectives in Aragón, Levante, and Castile. Leval then guides the reader through an incredible variety of urban examples of self-organisation, from factories and workshops to medicine, social services, Barcelona’s tramway system, and beyond. He concludes with a brief but perceptive consideration of the broader political context in which workers carried out such a far-reaching revolution in social organisation—and a rumination on who and what was responsible for its defeat.

This classic translation of the French original by Vernon Richards is presented in this edition for the first time with an index. A new introduction by Pedro García-Guirao and a preface by Stuart Christie offer a précis of Leval’s life and methods, placing his landmark study in the context of more recent writing on the Spanish collectives—eloquently positing that Leval’s account of collectivism and his assessments of their achievements and failings still have a great deal to teach us today.