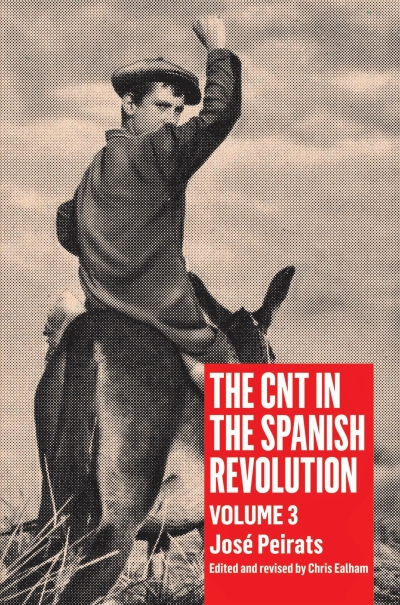 The CNT in the Spanish Revolution Volume 3

Volume 3 tells of the CNT’s last push for the anarchist revolution.

José Peirats’ account is effectively the official CNT history of the war, passionate, partisan but, above all, intelligent. Its huge sweeping canvas covers all areas of the anarchist experience – the spontaneous militias, the revolutionary collectives, the moral dilemmas occasioned by the clash of revolutionary ideals and the stark reality of the war effort against Franco and his German Nazi and Italian Fascist allies. Volume 3 tells of the CNT’s last push for the anarchist revolution in Spain, and the crushing defeat of the wide ranging activities of the CNT.  An additional chapter surveys “The History of Spanish Anarchism in the English Language.”

“José Peirats’ The CNT in the Spanish Revolution is a landmark in the historiography of the Spanish Civil War… Originally published in Toulouse in the early 1950s, it was a rarity anxiously searched for by historians and others who gleefully pillaged its wealth of documentation. Even its republication in Paris in 1971 by the exiled Spanish publishing house, Ruedo Ibérico, though welcome, still left the book in the territory of specialists. For that reason alone, the present project to publish the entire work in English is to be applauded.” —Professor Paul Preston, London School of Economics

“…this is a wonderful work and an essential resource for anyone interested in the history of the CNT and the Spanish revolution. Indeed, reading Peiriats work you see how much other historians (and other anarchists) have lifted from it in their books. It is great to finally have the work available in English.” —www.struggle.ws

“For those whose field of study is modern Spain, this is indeed an obligatory purchase. Given that this edition has been indexed and footnoted it may prove more useful to scholars than the original Spanish-language editions.” —Kate Sharpley Library

After starting work at the age of 8, José Peirats joined the anarcho-syndicalist CNT at 14. He received his education inside the factories, union centres and anarchist-run schools of Barcelona, becoming one of the great “intellectuals” of the Spanish anarchist movement, publishing a stream of books, pamphlets and newspaper articles on a diverse range of subjects, including history, philosophy, cinema and politics.