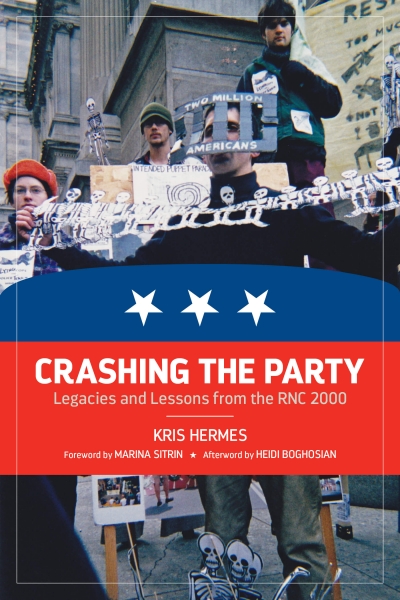 Crashing the Party: Legacies and Lessons from the RNC 2000

This book shows how events in 2000 acted as a testing ground to develop repressive policing methods now used across the U.S., as well as providing a laboratory for radical, innovative, and confrontational forms of legal support.

Over the past fifteen years, people in the United States—and dissidents in particular—have witnessed a steady escalation of the National Security State, including invasive surveillance and infiltration, indiscriminate police violence, and unlawful arrests. These concerted efforts to spy on Americans and undermine meaningful social change are greatly enhanced by the coordination of numerous local, state, and federal agencies often operating at the behest of private corporations. Normally associated with the realities of a post-9/11 world, Crashing the Party shows how these developments were already being set in motion during the Republican National Convention (RNC) protests in 2000. It also documents how, in response, dissidents confronted new forms of political repression by pushing legal boundaries and establishing new models of collective resistance.

Crashing the Party explains how the events of 2000 acted as a testing ground in which Philadelphia Police Commissioner John Timoney was able to develop repressive methods of policing that have been used extensively across the U.S. ever since. At the same time, these events also provided a laboratory for the radical, innovative, and confrontational forms of legal support carried out by R2K Legal, a defendant-led collective that raised unprecedented amounts of money for legal defense, used a unique form of court solidarity to overcome hundreds of serious charges, and implemented a PR campaign that turned the tide of public opinion in favor of dissidents. While much has been written about the global-justice era of struggle, little attention has been paid to the legal struggles of the period or the renewed use of solidarity tactics in jail and the courtroom that made them possible. By analyzing the successes and failures of these tactics, Crashing the Party offers rare insight into the mechanics and concrete effects of such resistance. In this way, it is an invaluable resource for those seeking to confront today’s renewed counterintelligence tactics.

Kris Hermes is a Bay Area–based activist who has worked for nearly thirty years on social justice issues. Organizing with ACT UP Philadelphia in the late 1990s spurred his interest in legal support work and led to his years-long involvement with R2K Legal. Since 2000, Hermes has been an active, award-winning legal worker-member of the National Lawyers Guild and has been a part of numerous law collectives and legal support efforts over the years. In this capacity, he has organized dozens of press conference and spoken at numerous community meetings, political conferences, book fairs, and other similar events across the U.S. Hermes has written extensively in his professional career as a media worker and as a legal activist.

Marina Sitrin is a writer, lawyer, teacher, organizer, and dreamer. She is the editor of Horizontalism: Voices of Popular Power in Argentina, author of Everyday Revolutions: Horizontalism & Autonomy in Argentina and coauthor of They Can’t Represent US! Reinventing Democracy from Greece to Occupy. She has a JD in International Women’s Human Rights from CUNY Law School and a PhD in Global Sociology from Stony Brook University.

Heidi Boghosian is the executive director of the A.J. Muste Memorial Institute and former executive director of the National Lawyers Guild. She is the cohost of the weekly civil liberties radio show Law and Disorder on Pacifica’s WBAI in New York and over forty national affiliates. She received her JD from Temple Law School where she was the editor in chief of the Temple Political & Civil Rights Law Review. She also holds an MS from Boston University and a BA from Brown University. She is the author of Spying on Democracy: Government Surveillance, Corporate Power, and Public Resistance.