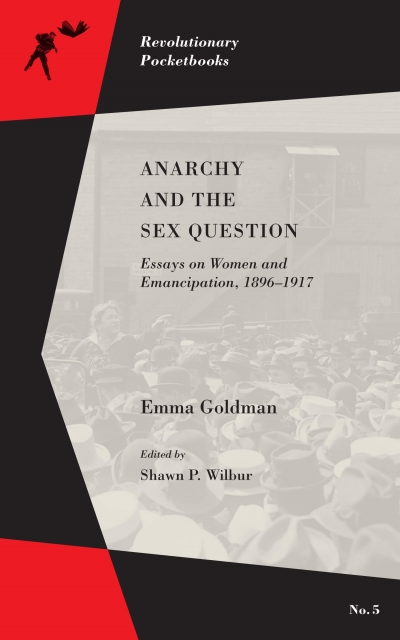 Anarchy and the Sex Question

– Essays on Women and Emancipation, 1896-1917
“The Sex Question” emerged for Goldman in multiple contexts, and we find her addressing it in writing on subjects as varied as women’s suffrage, “free love,” birth control, the “New Woman,” homosexuality, marriage, love, and literature.

For Emma Goldman, the “High Priestess of Anarchy,” anarchism was “a living force in the affairs of our life, constantly creating new conditions,” but “the most elemental force in human life” was something still more basic and vital: sex.

“The Sex Question” emerged for Goldman in multiple contexts, and we find her addressing it in writing on subjects as varied as women’s suffrage, “free love,” birth control, the “New Woman,” homosexuality, marriage, love, and literature. It was at once a political question, an economic question, a question of morality, and a question of social relations.

But her analysis of that most elemental force remained fragmentary, scattered across numerous published (and unpublished) works and conditioned by numerous contexts. Anarchy and the Sex Question draws together the most important of those scattered sources, uniting both familiar essays and archival material, in an attempt to recreate the great work on sex that Emma Goldman might have given us. In the process, it sheds light on Goldman’s place in the history of feminism.

Emma Goldman (1869–1940) emigrated from Russia to the United States in 1885, just as the international anarchist movement was forming, and soon became among the best-known figures associated with anarchism. The remainder of her life was speaking, writing, publishing, and agitating, despite legal harassment, imprisonment, and deportation. Many years after her death, Goldman’s ideas remain important influences among both anarchists and feminists. Her works include Anarchism and Other Essays (1910), My Disillusionment in Russia (1923), and Living My Life (1931).

Shawn P. Wilbur is a historian, translator, and curator of the Libertarian Labyrinth digital archive. His published translations include work by Charles Fourier (The World War of Small Pastries), Pierre-Joseph Proudhon, and Joseph Déjacque.

See and hear author interviews, book reviews, and other news on the Emma Goldman’s Page HERE