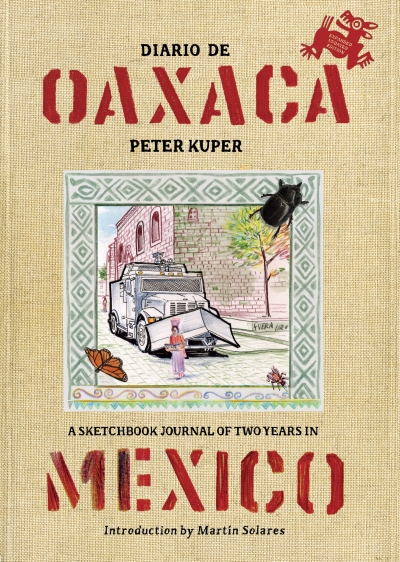 Peter Kuper
This firsthand account presents a distinct artistic vision of Oaxacan life, from explorations of the beautiful environment to portrayals of the fight between strikers and government troops that left more than twenty people dead.

Painting a vivid, personal portrait of social and political upheaval in Oaxaca, Mexico, this unique memoir employs comics, bilingual essays, photos, and sketches to chronicle the events that unfolded around a teachers’ strike and led to a seven-month siege.

When award-winning cartoonist Peter Kuper and his wife and daughter moved to the beautiful 16th-century colonial town of Oaxaca in 2006, they planned to spend a quiet year or two enjoying a different culture and taking a break from the U.S. political climate under the Bush administration. What they hadn’t counted on was landing in the epicenter of Mexico’s biggest political struggle in recent years. Timely and compelling, this extraordinary firsthand account presents a distinct artistic vision of Oaxacan life, from explorations of the beauty of the environment to graphic portrayals of the fight between strikers and government troops that left more than twenty people dead, including American journalist Brad Will.

Peter Kuper is a cofounder and editorial board member of political graphics magazine World War 3 Illustrated and a teacher who has taught at New York’s School of Visual Arts and Parsons School of Design. Best known for drawing Mad magazine’s Spy vs. Spy comic since 1997, he has also illustrated covers for Newsweek and Time magazine. He is the author of the graphic novel Ruins, winner of the 2016 Eisner Award for Best Graphic Album, as well as Drawn to New York and The System. He lives in New York City.

Martín Solares is a Mexican writer and editor. He’s the author of the novel The Black Minutes, which has been translated into English, French, Italian, German, Polish, Russian, Korean, and was a finalist for the Rómulo Gallegos, the Antonin Artaud, and the Bibliothèque des Littératures Policières Prizes. Director Mario Muñoz is currently adapting Solares’s script for a movie. In 2014, Solares published a book of essays concerned with fiction, How to Draw a Novel.