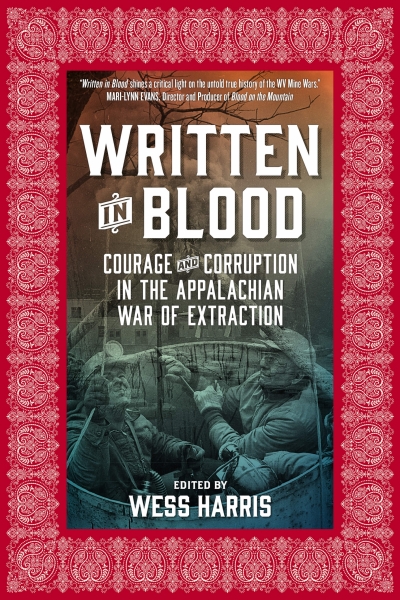 Written in Blood: Courage and Corruption in the Appalachian War of Extraction

Editor: Wess Harris
Written in Blood features the work of Appalachia’s leading scholars and activists making available an accurate, ungilded, and uncensored understanding of our history.

Written in Blood features the work of Appalachia’s leading scholars and activists making available an accurate, ungilded, and uncensored understanding of our history. Combining new revelations from the past with sketches of a sane path forward, this is a deliberate collection looking at our past, present, and future.

Sociologist Wess Harris (When Miners March) further documents the infamous Esau scrip system for women, suggesting an institutionalized practice of forced sexual servitude that was part of coal company policy. In a conversation with award-winning oral historian Michael Kline, federal mine inspector Larry Layne explains corporate complicity in the 1968 Farmington Mine disaster which killed seventy-eight men and became the catalyst for the passage of major changes in U.S. mine safety laws. Mine safety expert and whistleblower Jack Spadaro speaks candidly of years of attempts to silence his courageous voice and recalls government and university collaboration in covering up details of the 1972 Buffalo Creek flooding disaster, which killed over a hundred people and left four thousand homeless.

Moving to the next generation of thinkers and activists, attorney Nathan Fetty examines current events in Appalachia and musician Carrie Kline suggests paths forward for people wishing to set their own course rather than depend on the kindness of corporations.

Wess Harris is a sociologist, farmer, and educator who is widely recognized as a leading authority on West Virginia’s Great Mine War. He completed his graduate studies at Ohio University and later worked as a union miner and served as president of L.U. 1555. Each of his three major publications has shed light on previously unknown (oft-censored) history of the coal fields. He currently curates the When Miners March Traveling Museum.