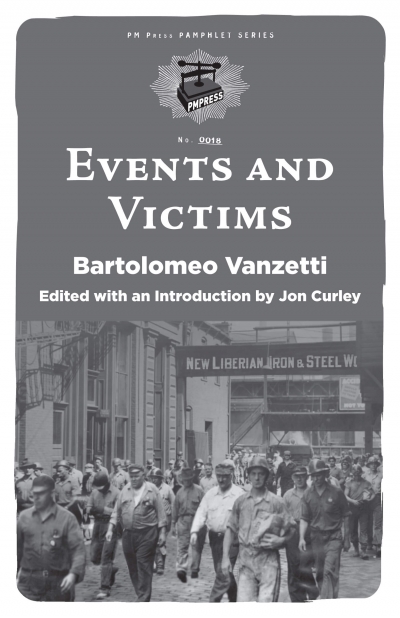 Bartolomeo Vanzetti • Editor: Jon Curley
This work features a never-before-published short story by this famous anarchist and victim of legal persecution, xenophobia, and condemnation for his radical politics.

This work by Bartolomeo Vanzetti, edited and with a detailed introduction by Jon Curley, features a never-before-published short story by this famous anarchist and victim of legal persecution, xenophobia, and condemnation for his radical politics. That fact that Vanzetti, an Italian immigrant, learned to write in English while jailed for a capital crime is remarkable enough. What is even more astonishing is that he chose to use his new language skills to write creatively, inventing a parable about worker exploitation and environmental disaster that is as relevant today as it was almost one hundred years ago when this prisoner took up his pen.

“Events and Victims” allows Vanzetti a new literary and historical voice, an important document that narrates the very injustice that its author suffered and fought. In a time of assault on immigrants, dissidents, radicals, and the environment, “Events and Victims” is as timely as ever.