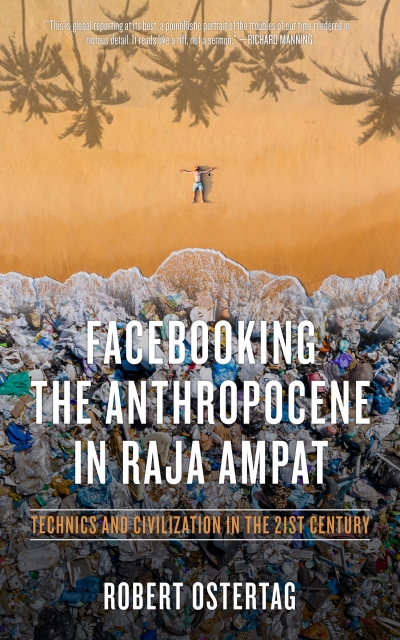 Facebooking the Anthropocene in Raja Ampat: Technics and Civilization in the 21st Century

Ostertag explores how we are changing as fast as the world around us—from how we make music, to how we have sex, to what we do to survive, and who we imagine ourselves to be.

The three essays of Facebooking the Anthropocene in Raja Ampat paint a deeply intimate portrait of the cataclysmic shifts between humans, technology, and the so-called natural world. Amid the breakneck pace of both technological advance and environmental collapse, Bob Ostertag explores how we are changing as fast as the world around us—from how we make music, to how we have sex, to what we do to survive, and who we imagine ourselves to be. And though the environmental crisis terrifies and technology overwhelms, Ostertag finds enough creativity, compassion, and humor in our evolving behavior to keep us laughing and inspired as the world we are building overtakes the world we found.

A true polymath who covered the wars in Central America during the 1980s, recorded dozens of music projects, and published books on startlingly eclectic subjects, Ostertag fuses his travels as a touring musician with his journalist’s eye for detail and the long view of a historian. Wander both the physical and the intellectual world with him. Watch Buddhist monks take selfies while meditating and DJs who make millions of dollars pretend to turn knobs in front of crowds of thousands. Shiver with families huddling through the stinging Detroit winter without heat or electricity. Meet Spice Islanders who have never seen flushing toilets yet have gay hookup apps on their phones.

Our best writers have struggled with how to address the catastrophes of our time without looking away. Ostertag succeeds where others have failed, with the moral acuity of Susan Sontag, the technological savvy of Lewis Mumford, and the biting humor of Jonathan Swift.

About the Author:
Bob Ostertag’s work cannot easily be summarized or pigeonholed. He has published more than twenty albums of music, five books, and a feature film. His writings on contemporary politics have been published on every continent and in many languages, beginning with his work as a journalist covering the civil war in El Salvador in the 1980s. His books cover a wide range of topics, from labor unions to the history of journalism to estrogen and testosterone. He has performed at music, film, and multimedia festivals around the globe. His radically diverse musical collaborators include the Kronos Quartet, John Zorn, Mike Patton, transgender cabaret icon Justin Vivian Bond, British guitar innovator Fred Frith, EDM DJ Rrose, and many others.