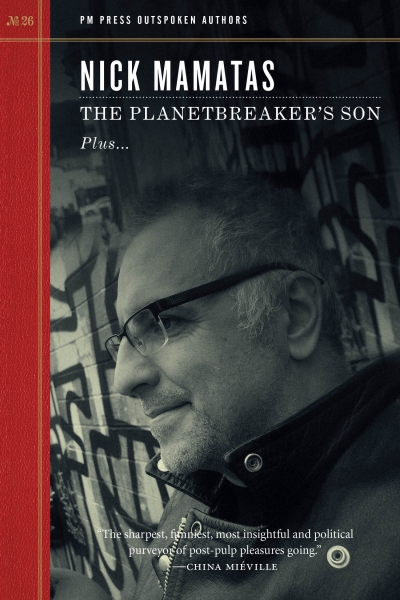 Nick Mamatas
An outrageous collection of Mamatas’s short fiction along with our world famous Outspoken Interview.

Upending and recombining familiar genres with fearless abandon, Nick Mamatas is known for his wicked satires in which Horror rides shotgun with SF as they power through Fantasy’s rush-hour traffic. Lanes are crossed, speed limits exceeded, and minds often blown.

Our title piece, original to this volume, is something entirely new. Trust me. “The Planetbreaker’s Son” is a starship novella in which interstellar emigrants maintain their stadium-sized vessel with dreams and play. On the fly. Think Pinocchio meets Ender’s Game.

“Ring, Ring, Ring, Ring, Ring, Ring, Ring” is a cautionary tale about the perilous interface between ancient wizardry and modern ringtones. And it’s for you. “The Term Paper Artist” is Nick’s celebrated and hilarious how-to on embellishing the academic establishment with equal parts imitation and duct tape. Based on a true story of lies.

Nick Mamatas is an author, anthologist, editor, and bookseller living in Oakland, California. His early nonfiction about digital culture and politics appeared in magazines such as New Observations, Artbyte, and the Village Voice. Nick’s first novel, Move Under Ground crossed the voice of the Beat movement with the themes of H.P. Lovecraft and became an instant cult classic. His other novels include the radical noir Love Is the Law, the satirical science fiction title Under My Roof, and the PM Press novel Sensation, which both prefigured and predicted the rise and fall of the Occupy movement. Nick’s fiction and editorial work has won the Bram Stoker Award and has been nominated for four other Stokers, two World Fantasy awards, two Hugo awards, two Locus Awards, and a Shirley Jackson award.