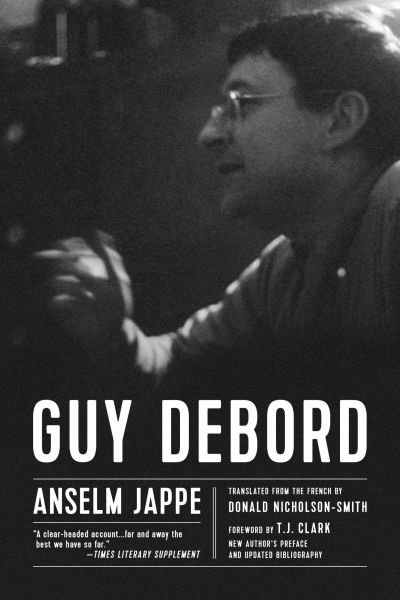 by Anselm Jappe • Translator: Donald Nicholson-Smith
This is the first and best intellectual biography of Guy Debord, prime mover of the Situationist International and author of The Society of the Spectacle.

This is the first and best intellectual biography of Guy Debord, prime mover of the Situationist International (1957–1972) and author of The Society of the Spectacle, perhaps the seminal book of the May 1968 uprising in France. Anselm Jappe offers a powerful corrective to the continual attempts to incorporate Debord’s theoretical work into “French theory.” Jappe’s focus, to the contrary, is on Debord’s debt to the Hegelian-Marxist tradition, to Karl Korsch and Georg Lukács, and more generally to left-Marxist currents of council communism. His close reading of Debord’s magnum opus supplies a superb gloss that has never been rivaled despite the great flood of writing on the Situationists in recent decades.

At the same time, Debord is placed squarely in context among the Letterist and Situationist anti-artists who, in the aftermath of World War II, sought to criticize and transcend the legacy of Dada and Surrealism. Jappe’s book offers a lively account of the Situationists’ theory and practice as this “last avant-garde” made its way from radical bohemianism to revolutionary theory and action.

Guy Debord has been translated into many languages. This PM Press reprint edition benefits from a new author’s preface and a bibliographical update.