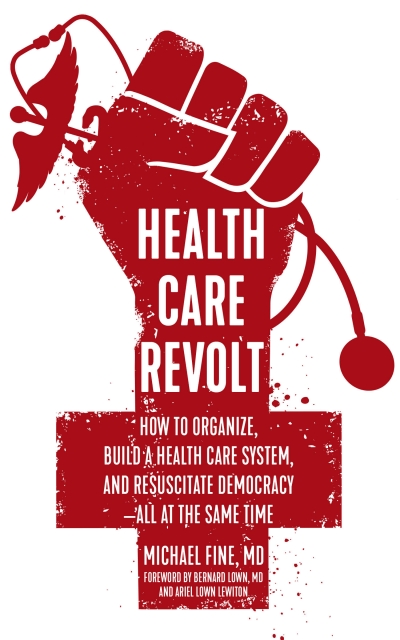 How to Organize, Build a Health Care System, and Resuscitate Democracy—All at the Same Time
by Michael Fine • Foreword: Bernard Lown and Ariel Lown Lewiton
This book searches for examples of systems that are effective and affordable, pictures such a system for the U.S., and creates a practical playbook for a revolution in care.

Today’s deliberations about a revamped health care system are stuck. We need a fresh analysis and a new vision. Health Care Revolt sets out to provide just that and at a most propitious time in U.S. history. Dr. Michael Fine’s manifesto frames the questions more expansively than others before him and offers an impassioned road map for a nation confused about which health care direction to travel.

The crux of Dr. Fine’s argument is that the U.S. does not have a health system. Rather we have put our faith in a so-called marketplace in which the few profit from the public’s ill-health. This ailing market has accelerated the erosion of American democracy by contributing to economic polarization. Health Care Revolt looks around the world for examples of health care systems that are effective and affordable, pictures such a system for the U.S., and creates a practical playbook for a political revolution in health care that will allow the nation to protect health while strengthening democracy.

Dr. Fine’s voice is likely to command attention. He writes with the experience of a clinician, state public health commissioner, scholar, and community organizer. He illustrates his points with personal stories and acute analysis, conveying medicalese in ways that readers will find comprehendible.