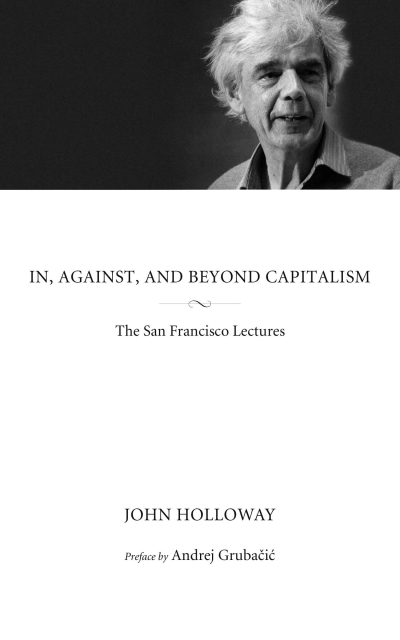 In, Against, and Beyond Capitalism: The San Francisco Lectures

Based on three recent lectures that focus on what anticapitalist revolution can mean todayâafter the historic failure of the idea that the conquest of state power was the key to radical change.

In, Against, and Beyond Capitalism is based on three recent lectures delivered by John Holloway at the California Institute of Integral Studies in San Francisco. The lectures focus on what anticapitalist revolution can mean today—after the historic failure of the idea that the conquest of state power was the key to radical change—and offer a brilliant and engaging introduction to the central themes of Holloway’s work.

The lectures take as their central challenge the idea that “We Are the Crisis of Capital and Proud of It.” This runs counter to many leftist assumptions that the capitalists are to blame for the crisis, or that crisis is simply the expression of the bankruptcy of the system. The only way to see crisis as the possible threshold to a better world is to understand the failure of capitalism as the face of the push of our creative force. This poses a theoretical challenge. The first lecture focuses on the meaning of “We,” the second on the understanding of capital as a system of social cohesion that systematically frustrates our creative force, and the third on the proposal that we are the crisis of this system of cohesion.

“His Marxism is premised on another form of logic, one that affirms movement, instability, and struggle. This is a movement of thought that affirms the richness of life, particularity (non-identity) and ‘walking in the opposite direction’; walking, that is, away from exploitation, domination, and classification. Without contradictory thinking in, against, and beyond the capitalist society, capital once again becomes a reified object, a thing, and not a social relation that signifies transformation of a useful and creative activity (doing) into (abstract) labor. Only open dialectics, a right kind of thinking for the wrong kind of world, non-unitary thinking without guarantees, is able to assist us in our contradictory struggle for a world free of contradiction.” —Andrej Grubacic, from his Preface

John Holloway is a professor of sociology at the Instituto de Ciencias Sociales y Humanidades in the Benemérita Universidad Autónoma de Puebla, Mexico. He has published widely on Marxist theory, on the Zapatista movement and on the new forms of anticapitalist struggle. His book Change the World without Taking Power has been translated into eleven languages and has stirred an international debate. His recent book, Crack Capitalism (Pluto, 2010), takes the argument further by suggesting that the only way in which we can think of revolution today is as the creation, expansion, multiplication and confluence of cracks in capitalist domination.

Andrej Grubacic is the chair of the Anthropology and Social Change Department at the California Institute of Integral Studies. His most recent publication is Don’t Mourn, Balkanize! Essays after Yugoslavia (2010). Andrej is a member of the International Council of the World Social Forum, the Industrial Workers of the World, and the Global Balkans Network. He is associated with Retort, a group of antinomian writers, artists, artisans, and teachers based in the San Francisco Bay Area.