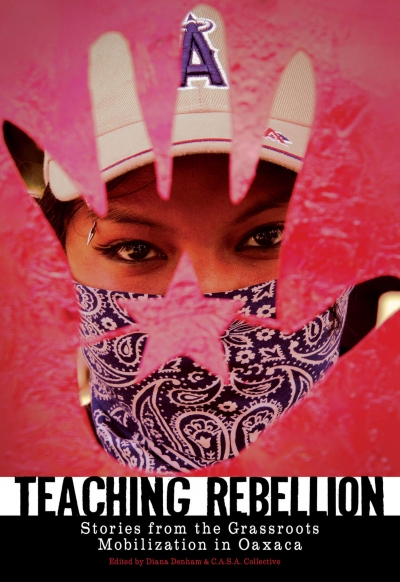 Teaching Rebellion: Stories from the Grassroots Mobilization in Oaxaca

Diana Denham and the C.A.S.A. Collective

In 2006, in Oaxaca, what began as a teachers’ strike demanding more resources for education quickly turned into a massive movement that demanded direct, participatory democracy.

Also available in Spanish as Ensenando Rebeldia from the US webstore

In 2006, Oaxaca, Mexico, came alive with a broad and diverse movement that captivated the nation and earned the admiration of communities organizing for social justice around the world. The show of international solidarity for the people of Oaxaca was the most extensive since the Zapatista uprising in 1994. Fueled by long ignored social contradictions, what began as a teachers’ strike demanding more resources for education quickly turned into a massive movement that demanded direct, participatory democracy.

Hundreds of thousands of Oaxacans raised their voices against the abuses of the state government. They participated in marches of up to 800,000 people, occupied government buildings, took over radio stations, called for statewide labor and hunger strikes, held sit-ins, reclaimed spaces for public art and created altars for assassinated activists in public spaces. In the now legendary March of Pots and Pans, two thousand women peacefully took over and operated the state television channel for three weeks. Barricades that were built all over the city to prevent the passage of paramilitaries and defend occupied public spaces, quickly became a place where neighbors got to know each other, shared ideas and developed new strategies for organizing.

Despite the fierce repression that the movement faced–with hundreds arbitrarily detained, tortured, forced into hiding, or murdered by the state and federal forces and paramilitary death squads–people were determined to make their voices heard.

“Once you learn to speak, you don’t want to be quiet anymore,” an indigenous community radio activist said.  Accompanied by photography and political art, Teaching Rebellion is a compilation of testimonies from longtime organizers, teachers, students, housewives, religious leaders, union members, schoolchildren, indigenous community activists, artists, journalists, and many others who participated in what became the Popular Assembly of the Peoples of Oaxaca. This is a chance to listen directly to those invested in and affected by what quickly became one of the most important social uprisings of the 21st century.

“Teaching Rebellion presents an inspiring tapestry of voices from the recent popular uprisings in Oaxaca. The reader is embraced with the cries of anguish and triumph, indignation and overwhelming joy, from the heart of this living rebellion.” –Peter Gelderloos, author of How Nonviolence Protects the State

“These remarkable people tell us of the historic teachers’ struggle for justice in Oaxaca, Mexico, and of the larger, hemispheric battle of all Indigenous people to end five hundred years of racism and repression.”
–Jennifer Harbury, author of Truth, Torture and the American Way

” During their marches and protests, whenever the Oaxaca rebels sighted a reporter, they would chant: ‘Press, if you have any dignity, the people of Oaxaca demand that you tell the truth.’ Teaching Rebellion answers that demand, with ample dignity, providing excellent context to understand the 2006 uprising and extensive and eloquent interviews with the participants themselves; an amazing read and an important contribution to the literature of contemporary rebellion.”
–John Gibler, author of Mexico Unconquered: Chronicles of Power and Revolt

Diana Denham currently coordinates C.A.S.A Chapulín, a center for international solidarity in Oaxaca, Mexico. Before moving to Oaxaca, she worked on squatters’ settlements with the Landless Movement for Agrarian Reform in Northeastern Brazil. She also produced The Right to Share in Our Common Wealth, a documentary film about a local political project implemented by the Workers Party aimed at the inclusion of traditionally marginalized sectors of Brazilian society.

The C.A.S.A. Collective facilitates the work of international activists as human rights observers, independent journalists and volunteers  for grassroots organizations.