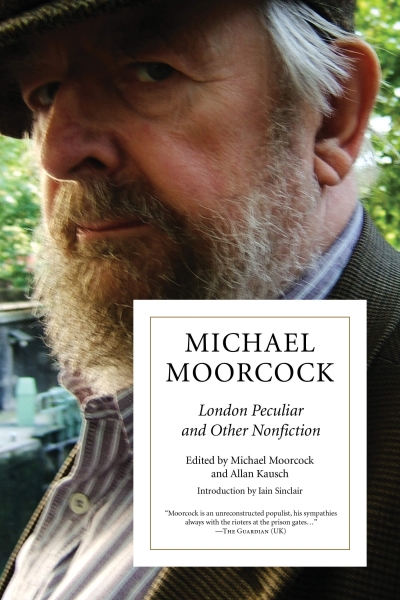 London Peculiar and Other Nonfiction

The best of Moorcock’s published, unpublished, and uncensored essays, articles, reviews, and opinions covering a wide range of subjects.

Voted by the London Times as one of the best writers since 1945, Michael Moorcock was shortlisted for the Whitbread Prize and won the Guardian Fiction Prize. He has won almost all the major Science Fiction, Fantasy, and lifetime achievement awards including the “Howie,” the Prix Utopiales and the Stoker. Best known for his rule-breaking SF and Fantasy, including the classic Elric and Hawkmoon series, he is also the author of several graphic novels.

Now, in London Peculiar and Other Nonfiction, Michael Moorcock personally selects the best of his published, unpublished, and uncensored essays, articles, reviews, and opinions covering a wide range of subjects: books, films, politics, reminiscences of old friends, and attacks on new foes. Drawn from over fifty years of writing, including his most recent work from the pages of the Los Angeles Times, and the Guardian, along with obscure and now unobtainable sources, the pieces in London Peculiar and Other Nonfiction showcase Moorcock at his acerbic best. They include:

“London Peculiar,” an impassioned statement of Moorcock’s memories of wartime London. The architectural “improvements” wrought by the rebuilding of the city after World War Two brought cultural changes as well, many to the detriment of the city’s inhabitants.

Review of R. Crumb’s Genesis, previously unavailable in English, this lengthy review of the underground comic artist’s retelling of the first book of the Bible leads Moorcock to address nostalgia for the sixties.

“A Child’s Christmas in the Blitz” âAn autobiographical recounting of Moorcock’s childhood in wartime London, with memories of the freedom and hardships he encountered during the bombings, and the happy times he spent with his parents.

These, along with dozens more, make this a collection Moorcock fans won’t want to miss, and the perfect introduction for new readers who will soon discover why Alan Moore (Watchmen) says: “Moorcock seizes the 21st century bull by its horns and wrestles it into submission with a Texan rodeo confidence.”

“Moorcock’s reviews and critical essays seem to me exemplary. They are never routine, never obligatory, never tired. They seem to me to be models of what a creative writer should do when producing critical prose. His writing here is always a conversation, never a monologue…we feel lucky to be listening in.”  —Alan Wall, writer, poet, and professor of writing and literature at the University of Chester, UK.

“London Peculiar is the first full sampling of Moorcock’s most important and imperishable musings on subjects both vast and various: movies and music, science and politics, the old days at New Worlds, from Philip K. Dick to R. Crumb, classics from Huxley to Pynchon, and tasty tidbits from the Tea Party to Texas barbecue. Gleaned from a full half century of opinion and outcry, London Peculiar is the work of a man of letters in the grand tradition of Orwell and Dr. Johnson. It’s Old School and it’s all you need to know about Tomorrow.”  —Terry Bisson, Hugo and Nebula award-winning novelist

“Moorcock is elegant and aggressive, consistently entertaining, and frequently wise and generous.” —Lewis Jones, Spectator (UK) on Into the Media Web

“These non-genre-related pieces add up to a far more complex and fascinating portrait of Moorcock as a writer and a ‘post-war culture-ruffian’ as Alan Moore describes him…and lend…a deep texture that makes for fascinating reading.”  —Gary K. Wolfe, Locus on Into the Media Web

Born in London in 1939, Michael Moorcock now lives in Texas and Paris, France. A prolific and award-winning writer with more than eighty works of fiction and nonfiction to his name, he is the creator of Elric, Jerry Cornelius, and Colonel Pyat amongst many other memorable characters. His nonfiction has appeared in the Spectator, the Financial Times, the Guardian, the Telegraph, and the Los Angeles Times as well as many others.

Born in Chicago in 1957, Allan Kausch now lives in the San Francisco Bay Area. Editor of over 1100 projects for Lucasfilm Ltd., (including the manga adaptations of the original Star Wars films for which he won the Eisner and Harvey awards) Kausch has also edited five volumes of the Selected Letters of Philip K. Dick for Underwood Books, over sixty books for Tachyon Publications, a dozen for Night Shade Books, six for Black Widow Press, and multiple projects for PM Press.

The city of London is central to Iain Sinclair’s work, and his books tell a psychogeography of London involving characters including Jack the Ripper, Count Dracula, and Arthur Conan Doyle. His nonfiction works include Lights Out for the Territory: 9 Excursions in the Secret History of London (1997), London Orbital: A Walk Around the M25 (2002), and Edge of the Orison (2005).

Edited by: Michael Moorcock and Allan Kausch with an introduction by Iain Sinclair