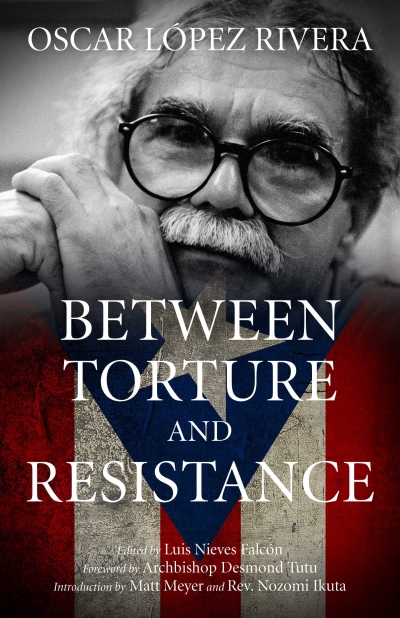 Between Torture and Resistance

Through photographs, paintings, and graphic content, Oscar’s life is made strikingly accessible, so all can understand why this man has been deemed dangerous to the U.S. government.

“Listening to Oscar’s voice in this book makes something clear that one such as Nelson Mandela would know well: his sense of liberty has not been extinguished by the jailers’ bars or the torturers on call.”
—Celina Romany-Siaca, former president, Puerto Rican Bar Association

“The story of Puerto Rican nationalist Oscar López Rivera told in this book is a story of the lengths to which our government will go to punish and silence voices of liberation. But it is also the story of the courage of one man who perseveres in his hunger and thirst for justice.”
—Bishop Thomas Gumbleton, founding president, Pax Christi USA

The story of Puerto Rican leader Oscar López Rivera is one of courage, valor, and sacrifice. A decorated Viet Nam veteran and well-respected community activist, López Rivera now holds the distinction of being one of the longest held political prisoners in the world. Behind bars since 1981, López Rivera was convicted of the thought-crime of “seditious conspiracy,” and never accused of causing anyone harm or of taking a life. This book is a unique introduction to his story and struggle, based on letters between him and the renowned lawyer, sociologist, educator, and activist Luis Nieves Falcón.

In photographs, reproductions of his paintings, and graphic content, Oscar’s life is made strikingly accessible—so all can understand why this man has been deemed dangerous to the U.S. government. His ongoing fight for freedom, for his people and for himself (his release date is 2027, when he will be 84 years old), is detailed in chapters which share the life of a Latino child growing up in the small towns of Puerto Rico and the big cities of the U.S. It tells of his emergence as a community activist, of his life underground, and of his years in prison. Most importantly, it points the way forward.

With a vivid assessment of the ongoing colonial relationship between the U.S. and Puerto Rico, it provides tools for working for López Rivera’s release—an essential ingredient if U.S.-Latin American relations, both domestically and internationally, have any chance of improvement. Between Torture and Resistance tells a sad tale of human rights abuses in the U.S. which are largely unreported. But it is also a story of hope—that there is beauty and strength in resistance.

“In spite of the fact that here the silence from outside is more painful than the solitude inside the cave, the song of a bird or the sound of a cicada always reaches me to awaken my faith and keep me going.” —Oscar López Rivera

Oscar López Rivera was born in San Sebastián, Puerto Rico on January 6, 1943. His family moved to the U.S. when he was an adolescent, and—like many young Latino and African American men—he was drafted into the U.S. army; his service in Viet Nam earned him the Bronze Star. When he returned from the war in 1967, he immediately set to work organizing to improve the quality of life for his people, helping to create both the Puerto Rican High School and the Puerto Rican Cultural Center of Chicago, Illinois. Eventually, however, Oscar and other young Puerto Ricans—inspired by heroic guerilla movements throughout the world—decided that their work for the independence of Puerto Rico could best be conducted in clandestine fashion. López Rivera was arrested in 1981, and ultimately sentenced to 55 years for the thought crime of seditious conspiracy; his release date is 2027, when he will be 84 years old. From 1986 to 1998, he was held in the most super maximum security prisons in the federal prison system, in conditions not unlike those at Guantanamo under which “enemy combatants” are held—conditions which the International Red Cross have called tantamount to torture. Over López Rivera’s long years behind bars, he has become a talented and prolific artist whose drawings and paintings form part of an itinerant exhibit, Not Enough Space, along with fellow independentista Carlos Alberto Torres. He has also authored a chapter, “A Century of Colonialism: One Hundred Years of Puerto Rican Resistance,” in Joy James’ Warfare in the American Homeland.

Dr. Luis Nieves Falcón, renowned lawyer, psychologist, and sociologist, is professor emeritus of the University of Puerto Rico (UPR) and a longtime advocate for Puerto Rican human rights. A founder of the UPR’s Department of Latin American and Caribbean Studies, Dr. Falcón has been at the intellectual and activist forefront of every major modern campaign for Puerto Rican sovereignty. As chairman of the Puerto Rico Committee for Human Rights, the Puerto Rican PEN Club, and the International League for the Rights and Liberation of the Peoples, he has convened international tribunals on various issues concerning the Puerto Rican condition in Barcelona, New York, Vieques, and San Juan. Dr. Falcón is presently the president of the Nilita Vientós Gastón Foundation. His recent books include Un siglo de represión política en Puerto Rico: 1898-1998 [A Century of Political Repression in Puerto Rico: 1898-1998], and La Luz Desde La Ventana: Conversaciones con Filiberto Ojeda Ríos [The Light from the Window: Conversations with Filiberto Ojeda Rios].

Desmond Mpilo Tutu is Archbishop Emeritus of the Anglican Church of South Africa. The recipient of the 1984 Nobel Peace Prize, Archbishop Tutu has long spoken out for human rights for all, and for the release of all political prisoners. He was the Chair of South Africa’s Truth and Reconciliation Commission, and now chairs The Elders, a group committed to dealing with the world’s most intractable challenges, including Nelson Mandela, Jimmy Carter, and Mary Robinson.

Matt Meyer is author and editor of six books, including four titles on contemporary Africa, and PM Press’ Let Freedom Ring: A Collection of Documents from the Movements to Free U.S. Political Prisoners. He is a New York City-based educator and activist, and a founder of the anti-imperialist collective Resistance in Brooklyn. Meyer has served as national chair for both the War Resisters League and the Peace and Justice Studies Association, and has been called a natural coalition-builder who “provides tools for today’s activists” by Argentine Nobel Peace laureate Adolfo Perez Esquivel.