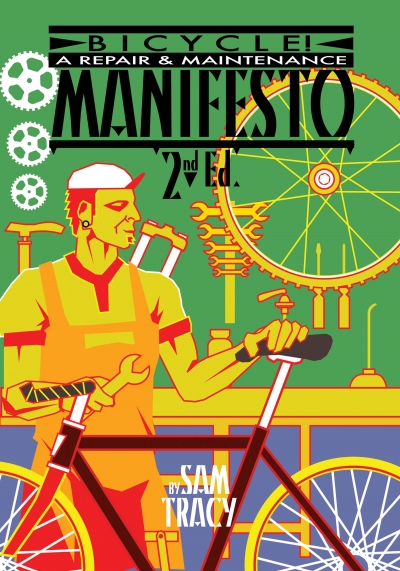 Bicycle! covers everything you need to know to feed and care for your ride, cutting through the obtuse techno-speak and delivering maintenance clarity with a touch of humor and radicalism.

There is nothing sacrosanct about bike repair. Its pursuit only requires the will to learn. At their finest hours bikes exist on a level above mere machines, and there’s no reason why the joy should end when the ride is over.

Bicycle! written by a long-time bicycle mechanic, covers everything you need to know to feed and care for your ride. This book cuts through the obtuse techno-speak and delivers maintenance clarity with a touch of humor and radicalism, while categorically denying mechanistry’s supposed dreariness. Bicycle! is about encouraging society to learn for themselves how to make their bikes work, not because they have to, but because they want to.

With detailed descriptions of all maintenance tasks and repair situations, clearly illustrated with photographs and drawings, this guide will serve the need for a serious rider’s manual. Professional bicycle workers—messengers, mechanics, pedi-cab drivers—as well as bicycle commuters have been waiting for this book. This second edition includes an abundance of helpful photos, an expanded index, and an updated resources section. Moreover, it benefits from insights gained through five years’ worth of additional mechanic experience including low-cost and no-cost repair solutions the author developed while serving as a Peace Corps Volunteer in Mauritania.

Some of the Topics Covered:

Sam Tracy began working as a bike mechanic in 1993, when he cut his teeth at Wheel and Sprocket in Milwaukee. After receiving a BA in political science from the University of Wisconsin, he returned to Minneapolis, where he found work as a bicycle messenger. In 1998 he moved to Arcata, CA, for a position as Managing Editor of the Auto-Free Times, a nonprofit quarterly. His first bicycle repair manual, How to Rock and Roll: A City Rider’s Repair Manual, written during this period, was published by Black Kettle Graphics in 2001.

In 2000 Tracy was hired to manage Calhoun Rentals in Minneapolis, a position he held for four years. Among other tasks he was responsible for maintaining a 70-bike rental fleet, a complex and challenging mission which demanded a commitment to safe and effective low-cost repair techniques. Over the winters he worked as a mechanic at Calhoun Cycles, a recumbent bicycle specialty shop, where he became immersed in the lively and experimental DIY frame-building culture for which the ’bent enthusiasts are known.

After signing on with Speck Press to write Bicycle! A Repair & Maintenance Manifesto in 2003, Tracy moved to the cycling mecca of San Francisco, where he worked to further refine his repair skills at the Freewheel, a high-end commuter and road bike shop. He picked up numerous key techniques from the seasoned mechanics that really kept the place going.

After releasing Bicycle! in 2006, Speck Press published Tracy’s third book, Roadside Bicycle Repair: A Pocket Manifesto in 2008. Returning to the non-profit sphere, Tracy spent two years as Office Manager for HomeStart, a non-profit dedicated to ending homelessness in the Boston area. In 2008 he and his wife left to serve with the Peace Corps in the Islamic Republic of Mauritania, which among other things provided exposure to a whole new level of resourcefulness in bicycle repair.

Most recently, in 2010 he worked as a mechanic at the Hub Bicycle Co-op, the Twin Cities’ only cooperatively owned bike shop. Tracy’s first book is out of print, and his last two are now in second editions. He is currently working on a novel. He and his wife live in Riga, Latvia, where she is posted as a U.S. diplomat.