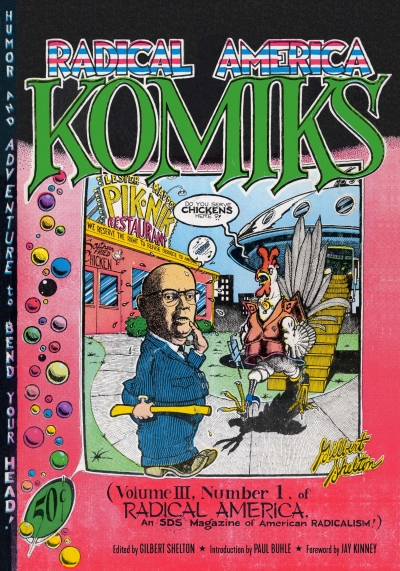 “Underground comix,” an artistic expression of rambunctious rebellion in the Vietnam War era, were exploding in 1969 when Radical America, a journal affiliated with Students for a Democratic Society, published a memorable comic art edition. Its principal artist and editor, Gilbert Shelton, whose Fabulous Furry Freak Brothers would be enjoyed in many editions across the world, brought to the project his Texas pals Frank Stack and Jack Jackson. Also on hand, among others, were Chicago comics innovators Jay Lynch and Skip Williamson. Together, these and other contributors issued a veritable artistic manifesto: a new vernacular art had arrived!

A half century after its original appearance, Radical America Komiks retains its rebellious spirit and its rollicking humor. Dopey but also militantly antimilitarist, the comics in this reprinted volume speak to the ideas, sentiments, and artistic experiments of a generation.