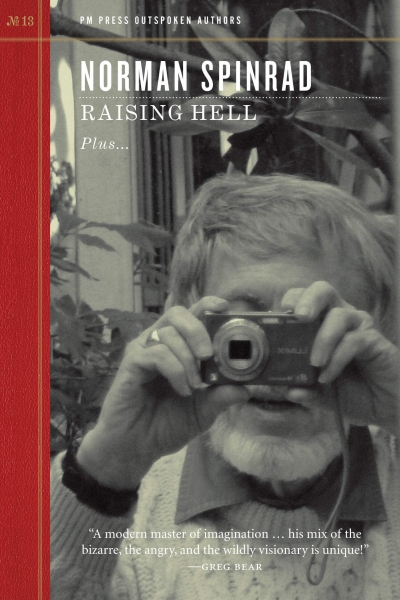 âRaising Hellâ takes a poke at Christian fundamentalists and corporate CEOs through an account of the fight to improve working conditions in Hell, with the help of Jimmy Hoffa, John L. Lewis, and CÃ©sar ChÃ¡vez.

As an ambitious, alienated, and awesomely talented kid from the Bronx, Norman Spinrad rode the revolutionary “New Wave” of 1960s science fiction to fame, if not fortune. His usually angry, often hilarious, and always radical novels changed the field forever. Once devoted to interplanetary adventure, SF began to explore the uneasy intersection between today’s illusions and tomorrow’s dystopian disasters. It grew dark, grew wild, grew up.
An all-new novella designed to take a poke at both Christian fundamentalists and corporate CEOs, Raising Hell is a rousing account of the fight to improve working conditions in Hell, for both demons and the damned, with the help of such deceased immortals as Jimmy Hoffa, John L. Lewis, and César Chávez.

Plus…
“The Abnormal New Normal,” an impolite inquiry into today’s high-finance low-jinks, which unmasks the manipulations of the 1% and proposes a radical fix.

And Featuring: our Outspoken Interview, the usual mix of intimate revelation, gossip, and tales from the front lines of writing and publishing.

One of the original gang who created science fiction’s controversial “New Wave“ in the 1960s, New Yorker Norman Spinrad is SF’s original outlaw, known for his often hilarious and always fearless attacks on the sacred cows of both the Right and the Left. Alternately censored and celebrated for his novels (including The Iron Dream and Bug Jack Barron), he has also written for the original Star Trek and twice served as president of the Science Fiction Writers of America.