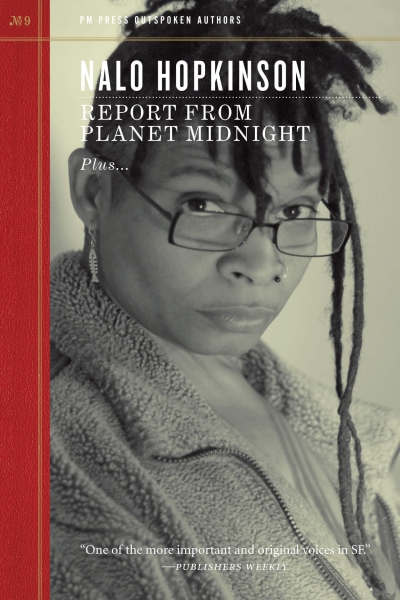 Report from Planet Midnight takes on race and racism in literature. In Message in a Bottle, an American Indian who doesn’t like children is befriended by a strange four-year-old, who seems wise beyond her years.

Nalo Hopkinson has been busily (and wonderfully) “subverting the genre” since her first novel, Brown Girl in the Ring, won a Locus Award for SF and Fantasy in 1999. Since then she has acquired a prestigious World Fantasy Award, a legion of adventurous and aware fans, a reputation for intellect seasoned with humor, and a place of honor in the short list of SF writers who are tearing down the walls of category and transporting readers to previously unimagined planets and realms.

Never one to hold her tongue, Hopkinson takes on sexism and racism in publishing in “Report from Planet Midnight,” a historic and controversial presentation to her colleagues and fans.

And Featuring: our Outspoken Interview, an intimate one-on-one that delivers a wealth of insight, outrage, irreverence, and top-secret Caribbean spells.

Nalo Hopkinson, born in Jamaica and now living in Toronto, is a superstar of modern fantasy. Her award winning novels include Brown Girl in the Ring (1998), Midnight Robber (2000), The Salt Roads (2003), and The New Moons Arms (2007). Her short story collection, Skin Folk (2001), was the winner of the World Fantasy Award and the Sunburst Award. She has edited and co-edited a number of fantasy anthologies, and taught at the Clarion workshops and other venues. She is a founding member and currently on the advisory committee of the Carl Brandon Society, which exists to further the conversation on race and ethnicity in SF and fantasy.