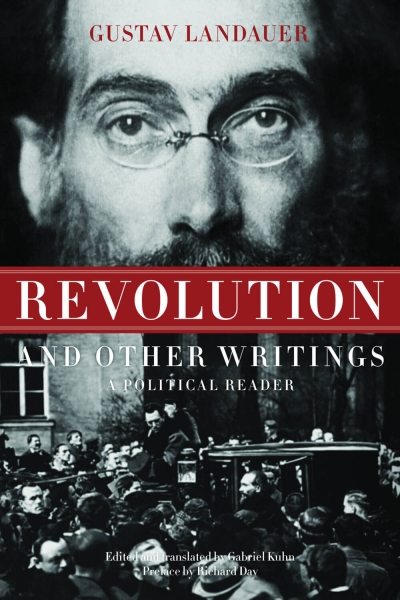 Revolution and Other Writings: A Political Reader

The first comprehensive collection of Landauer’s writings in English, a valuable addition to the history of anarchism.

“Landauer is the most important agitator of the radical and revolutionary movement in the entire country.”  This is how Gustav Landauer is described in a German police file from 1893. Twenty-six years later, Landauer would die at the hands of reactionary soldiers who overthrew the Bavarian Council Republic, a three-week attempt to realize libertarian socialism amidst the turmoil of post-World War I Germany. It was the last chapter in the life of an activist, writer, and mystic who Paul Avrich calls “the most influential German anarchist intellectual of the twentieth century.”

This is the first comprehensive collection of Landauer writings in English. It includes one of his major works, Revolution, thirty additional essays and articles, and a selection of correspondence. The texts cover Landauer’s entire political biography, from his early anarchism of the 1890s to his philosophical reflections at the turn of the century, the subsequent establishment of the Socialist Bund, his tireless agitation against the war, and the final days among the revolutionaries in Munich. Additional chapters collect Landauer’s articles on radical politics in the US and Mexico, and illustrate the scope of his writing with texts on corporate capital, language, education, and Judaism. The book includes an extensive introduction, commentary, and bibliographical information, compiled by the editor and translator Gabriel Kuhn as well as a preface by Richard Day.

“If there were any justice in this world–at least as far as historical memory goes–then Gustav Landauer would be remembered, right along with Bakunin and Kropotkin, as one of anarchism’s most brilliant and original theorists. Instead, history has abetted the crime of his murderers, burying his work in silence. With this anthology, Gabriel Kuhn has single-handedly redressed one of the cruelest gaps in Anglo-American anarchist literature: the absence of almost any English translations of Landauer.”
–Jesse Cohn, author of Anarchism and the Crisis of Representation: Hermeneutics, Aesthetics, Politics

“Gustav Landauer was, without doubt, one of the brightest intellectual lights within the revolutionary circles of fin de siècle Europe. In this remarkable anthology, Gabriel Kuhn brings together an extensive and splendidly chosen collection of Landauer’s most important writings, presenting them for the first time in English translation. With Landauer’s ideas coming of age today perhaps more than ever before, Kuhn’s work is a valuable and timely piece of scholarship, and one which should be required reading for anyone with an interest in radical social change.”
–James Horrox, author of A Living Revolution: Anarchism in the Kibbutz Movement

“At once an individualist and a socialist, a Romantic and a mystic, a militant and an advocate of passive resistance… He was also the most influential German anarchist intellectual of the twentieth century.”
–Paul Avrich, author of Anarchist Voices

Gustav Landauer is one of the key figures of German Anarchism, and his influence can be seen in the work of many prominent authors including Martin Buber, Walter Benjamin and Hermann Hesse. Born in 1870, by the 1890s he was Germany’s most prominent anarchist author and agitator. After several prison sentences and increasing tensions within the country’s anarchist movement, Landauer focused on translations, literary criticism, and philosophical writing. In 1908 he returned to political activism by founding the Socialist Bund and reviving the journal Sozialist. Both were forced to an end by World War I, which Landauer campaigned against unwaveringly. After the end of the war, he became involved in the Bavarian Revolution and played a decisive role in the proclamation of its council republic in April 1919. When this experiment in radical democracy was crushed by military force three weeks later, reactionary soldiers murdered Landauer.

About the Editor / Translator: