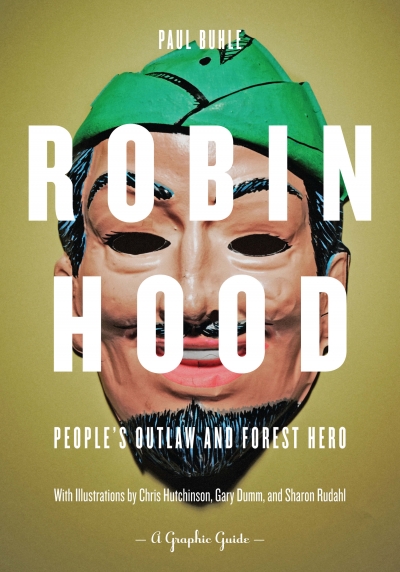 Paul Buhle brings a new dimension to Robin Hood, helping to explain why an outlaw from the 14th Century is still a left wing hero today.

Where and what was Robin Hood? Why is an outlaw from fourteenth century England still a hero today, with films, festivals and songs dedicated to his living memory?

This book explores the mysteries, the historical evidence, and the trajectory that led to centuries of village festivals around Mayday and the green space of nature unconquered by the forces in power. Great revolutionaries including William Morris adopted Robin as hero, children’s books offered many versions, and Robin entered modern popular culture with cheap novels, silent films and comics.

There, in the world of popular culture, Robin Hood continues to holds unique and secure place. The “bad-good” hero of pulp urban fiction of the 1840s-50s, and more important, the Western outlaw who thwarts the bankers in pulps, films, and comics, is essentially Robin Hood. So are Zorro, the Cisco Kid, and countless Robin Hood knockoff characters in various media.

Robin Hood has a special resonance for leftwing influences on American popular culture in Hollywood, film and television. During the 1930s-50s, future blacklist victims devised radical plots of “people’s outlaws,” including anti-fascist guerilla fighters, climaxing in The Adventures of Robin Hood, network television 1955-58, written under cover by victims of the Blacklist, seen by more viewers than any other version of Robin Hood.

With text by Paul Buhle, comics and assorted drawings by Christopher Hutchinson, Gary Dumm, and Sharon Rudahl; Robin Hood: People’s Outlaw and Forest Hero adds another dimension to the history and meaning of rebellion.

Paul Buhle, founder-editor of the new left journal Radical America, is now an ex-academic, editing radical comic art books from Wisconsin. He is the authorized biographer of C.L.R. James, and a scholar of the Hollywood Blacklist, comic art, labor, and the Left.

Gary Dumm, Cleveland native and prolific comic artist, has contributed to many anthologies, is the principal artist of Students for a Democratic Society: A Graphic History and has been published in the New York Times, Entertainment Weekly, and France’s Le Monde, among other outlets.

Christopher Hutchinson, a young artist and Connecticut native, ran for Congress as a socialist in 2010.

Sharon Rudahl, erstwhile civil rights activist and artist for the antiwar movement, was a leading comix artist of the underground era. Her recent work includes Dangerous Woman: The Graphic Biography of Emma Goldman and contributions to many anthologies. She lives in Los Angeles.