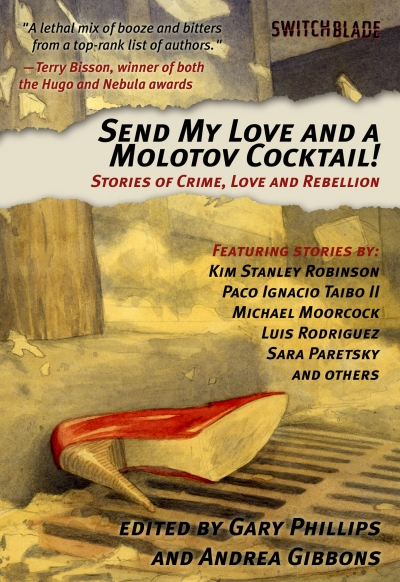 Send My Love and a Molotov Cocktail!: Stories of Crime, Love and Rebellion

An incendiary mix of original and out-of-print stories from the past, present and fearful future about the fight for a better world.

An incendiary mixture of genres and voices, this collection of short stories compiles a unique set of work that revolves around riots, revolts, and revolution. From the turbulent days of unionism in the streets of New York City during the Great Depression to a group of old women who meet at their local café to plan a radical act that will change the world forever, these original and once out-of-print stories capture the various ways people rise up to challenge the status quo and change up the relationships of power. Ideal for any fan of noir, science fiction, and revolution and mayhem, this collection includes works from Sara Paretsky, Paco Ignacio Taibo II, Cory Doctorow, Kim Stanley Robinson, and Summer Brenner.

About the Editors:
In addition to PM Press reissuing co-editor Gary Phillips‘ The Jook, his mystery novella The Underbelly, was recently published as part of PM’s Outspoken Authors series.  He is also editor and contributor to Orange County Noir, writes a regular column on pop culture on fourstory.org, Donuts at 2 A.M., and is writing two retro spy characters—Operator 5, set in the pulp period of the Great Depression, and super spy Derek Flint in the swinging sixties—for Moonstone Comics.

Andrea Gibbons lives in London, where she is currently studying at the London School of Economics. She is an editor with PM Press, and an associate editor of the progressive journal CITY. She is a closet writer of fiction, in addition to her editing work and non-fiction articles, which have been published in various mediums.

Samples from the Table of Contents: