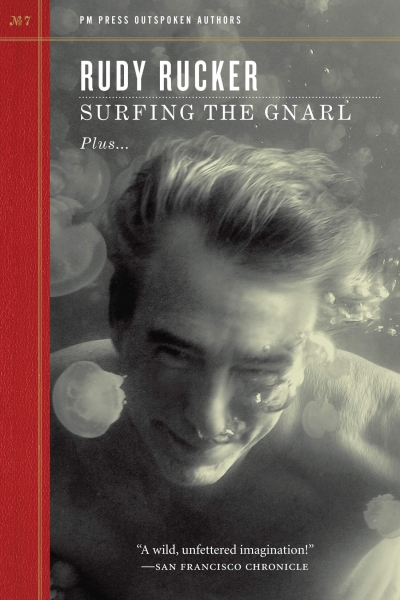 The original “Mad Professor” of cyberpunk.

The original “Mad Professor” of cyberpunk, Rudy Rucker (along with fellow outlaws William Gibson and Bruce Sterling) transformed modern science fiction, tethering the “gnarly” speculations of quantum physics to the noir sensibilities of a skeptical and disenchanted generation. In acclaimed novels like Wetware and The Hacker and the Ant he mapped a neotopian future that belongs not to sober scientists but to drug-addled, sex-crazed youth. And won legions of fans doing it.

In his outrageous new story “The Men in the Back Room at the Country Club,” Dr. Rucker infiltrates fundamentalist Virginia to witness the apocalyptic clash between Bible-thumpers and Saucer Demons at a country club barbecue. He shoots erotica into orbit with “Rapture in Space” to explore the future of foreplay in freefall. In his gonzo nonfiction masterpiece “Surfing the Gnarl,” he documents the role of the Transreal in transforming both the personal and the political, distinguishes with mathematical precision between “high gnarl” and “low gnarl” in literature and life, and argues for remaking popular culture as a revolutionary project.

And Featuring: PM’s exclusive Outspoken Interview, in which the author explains Infinity, deconstructs his own outrageous film career, answers one Jeopardy question, and (finally!) reveals the truth about Time. All under oath.

You’ll never be the same. Is that good or bad? Your call.