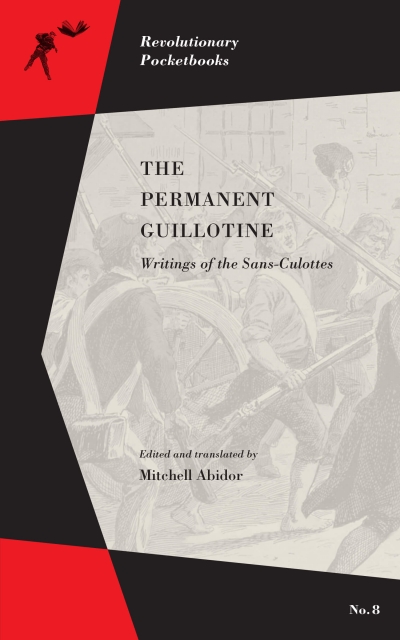 Editor and translator: Mitch Abidor
This is an anthology of figures who expressed the will and wishes of this nascent revolutionary class, in all its rage, directness, and contradictoriness.

When the Bastille was stormed on July 14, 1789, it wasn’t a crowd of breeches-wearing professionals that attacked the prison, freed the internees, and killed its superintendent, carrying off his head on a pike. It was the working people of Paris, who didn’t wear breeches, the sans-culottes. In the course of the French Revolution the sans-culottes questioned the economic system, the nature of property, the role and even the legitimacy of religion, and for the first time placed class relations at the heart of a revolutionary upheaval. They did so in an often-inchoate fashion, but they were new players on the stage of history, and the Revolution constituted their learning curve.

The Permanent Guillotine is an anthology of figures who expressed the will and wishes of this nascent revolutionary class, in all its rage, directness, and contradictoriness. Taken together, these documents provide a full portrait of the left of the left of the Revolution, of the men whose destruction by Robespierre allowed for Robespierre himself to be destroyed and for all the progressive measures they advocated and he implemented to be rolled back.

The Revolution they made was ultimately stolen from them, but their attempt was a fertile one, as their ideas flourished in the actions of generations of French revolutionaries.

Mitchell Abidor is the principal French translator for the Marxists Internet Archive. PM Press’s collections of his translations include Anarchists Never Surrender by Victor Serge, Voices of the Paris Commune, and Death to Bourgeois Society. His other published translations include The Great Anger: Ultra-Revolutionary Writing in France from the Atheist Priest to the Bonnot Gang; Communards: The Paris Commune of 1871 as Told by Those Who Fought for It; A Socialist History of the French Revolution by Jean Jaurès; and May Made Me: An Oral History of the 1968 Uprising in France.