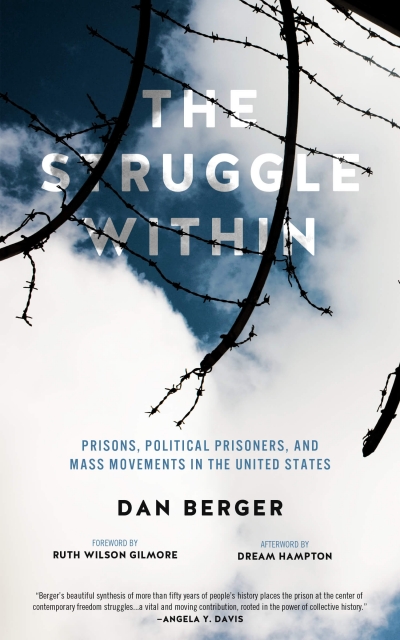 The Struggle Within: Prisons, Political Prisoners, and Mass Movements in the United States

The Struggle Within is an accessible yet wide-ranging historical primer about how mass imprisonment has been a tool of repression deployed against diverse left-wing social movements over the last fifty years.

The Struggle Within is an accessible yet wide-ranging historical primer about how mass imprisonment has been a tool of repression deployed against diverse left-wing social movements over the last fifty years. Berger examines some of the most dynamic social movements across half a century: black liberation, Puerto Rican independence, Native American sovereignty, Chicano radicalism, white antiracist and working-class mobilizations, pacifist and antinuclear campaigns, and earth liberation and animal rights.

“The Struggle Within powerfully demonstrates that the issue of political prisoners is not about individuals but about the deep and enduring bonds of community resistance. Berger’s beautiful synthesis of more than fifty years of people’s history places the prison at the center of contemporary freedom struggles. This book is necessary reading for all who wish to revive a radical tradition in the face of the prison’s coercive attempt at erasure. The Struggle Within is a vital and moving contribution, rooted in the power of collective history.“
—Angela Y. Davis, author and former political prisoner

“Before the U.S. had today’s mass incarceration, it had political prisoners. Dan Berger’s excellent book shows how political repression produced the human rights nightmare that exists today in America’s prisons. More, the book tells the history of the hundreds of activists who have been incarcerated here—and most important of all, the stories of those who remain inside. This historical account tells the truth not only about political incarceration but also about how movements can act to dismantle the U.S. prison nation. Wherever you find your place in social justice activism, this much-needed book will help enrich your work and make it more effective.“
—Laura Whitehorn, former political prisoner and editor of The War Before

“Dan Berger has provided scholars and activists alike an untold and unfortunately too easily forgotten history of political incarceration and the struggle to free political prisoners in the U.S. Berger deftly grapples not only with the resilience of the incarcerated and the movements seeking their freedom, but more importantly with the roots of political incarceration in modern colonialism and its primary justification—racism. More than stirring our hearts and minds, this timely book should move us to action!“
—José López, executive director of the Puerto Rican Cultural Center

“When the radical New Left crashed and burned, most participants resumed more or less conventional life trajectories. We too often forget that many of our brothers and sisters are still behind bars with no assurance of release. In The Struggle Within we are told about not only Mumia Abu-Jamal and Leonard Peltier but dozens of other political prisoners whose names we may not know. These men and women ’raised the stakes’ in confrontation with the Powers That Be and are behind bars not just for their ideas but because they were ’active participants in resistance movements.’ The author describes this book as an ’introductory and incomplete sketch,’ but it is, in fact, the most comprehensive survey of imprisoned Movement activists known to me. I deeply admire the author’s efforts to tell it like it is without excessive adjectives. While these souls are imprisoned, we are not free.“
—Staughton Lynd, author, educator, prison activist

“This vital piece connects not only an insightful academic reflection with lessons which radical movements would do well to learn, it connects past history with current realities in the service of a more just future. All intellectual pursuits should be so rooted in the service of building campaigns and organizations for the people’s liberation; Berger’s must-read book is a gift to social change activists everywhere.“
—Matt Meyer, coeditor of We Have Not Been Moved: Resisting Racism and Militarism in 21st Century America

About Dan Berger:
Dan Berger is an assistant professor of comparative ethnic studies at the University of Washington Bothell. His work on race, prisons, media, and American social movements has appeared widely in popular and scholarly journals. He is the author of Captive Nation: Black Prison Organizing in the Civil Rights Era, forthcoming from the University of North Carolina Press (2014). Berger is also the author or editor of three previous books: Letters From Young Activists, Outlaws of America: The Weather Underground and the Politics of Solidarity, and The Hidden 1970s: Histories of Radicalism. A longtime activist, Berger is a cofounder of Decarcerate PA.

About Ruth Wilson Gilmore:
Ruth Wilson Gilmore is a professor of geography at the CUNY Graduate Center. She is a member of the founding collective of Critical Resistance, one of the most important national anti-prison organizations in the United States. She examined how political and economic forces produced California’s prison boom in Golden Gulag: Prisons, Surplus, Crisis, and Opposition in Globalizing California, which was recognized by ASA with its Lora Romero First Book Award.

About dream hampton:
dream hampton has written about music, culture, and politics for twenty years. Her articles and essays have appeared in The Village Voice, The Detroit News, Harper’s Bazaar, Essence, and a dozen anthologies, most recently Born to Use Mics: Reading Nas’s Illmatic, edited by Michael Eric Dyson. A longtime member of the human rights organization Malcolm X Grassroots Movement, hampton helped to organize the Black August Hip Hop Concert Benefit to raise awareness about U.S. political prisoner for ten years. hampton directed The Black August Hip Hop Project, a film about the concert series, political prisoners, and MXGM.