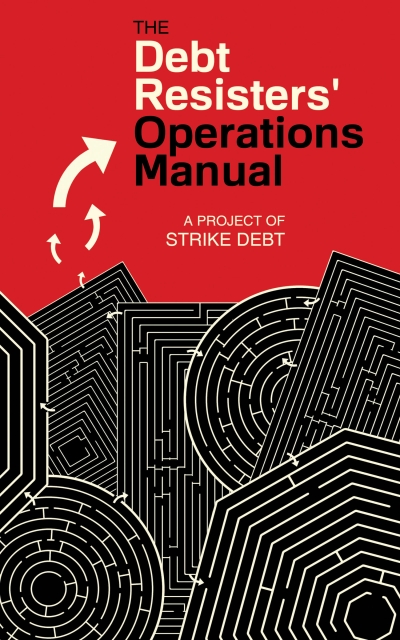 The Debt Resisters’ Operations Manual is a handbook for debtors everywhere to understand how this system really works, while providing practical tools for fighting debt in its most exploitative forms.

Over the last thirty years, as wages have stagnated across the country, average household debt has more than doubled. Increasingly, we are forced to take on debt to meet our needs—from housing, to education, to medical care. The results—wrecked lives, devastated communities, and an increasing reliance on credit to maintain our basic living standards—reveal an economic system that enriches the few at the expense of the many.

The Debt Resisters’ Operations Manual is a handbook for debtors everywhere to understand how this system really works, while providing practical tools for fighting debt in its most exploitative forms. Inside, you’ll find detailed strategies, resources, and insider tips for dealing with some of the most common kinds of debt, including credit card debt, medical debt, student debt, and housing debt. The book also contains tactics for navigating the pitfalls of personal bankruptcy, and information to help protect yourself from credit reporting agencies, debt collectors, payday lenders, check cashing outlets, rent-to-own stores, and more.

Written and edited by a network of activists, writers, and academics from Occupy Wall Street, additional chapters cover tax debt, sovereign debt, the relationship between debt and climate, and an expanded vision for a movement of mass debt resistance.

“That debt is neither inevitable nor ethical is one of the powerful assertions of Strike Debt, whose brilliant manual is both a practical handbook and a manifesto for a true debt jubilee: an economic rebirth in which the indebted are freed and financial institutions are reinvented.”
— Rebecca Solnit, author of A Paradise Built in Hell: The Extraordinary Communities That Arise in Disaster

“The impact of the neoliberal assault on the U.S. population in the past generation has rightly been designated a ‘failure by design.’ This failure is sharply class-based—for the designers it has been a grand success, and a failure for most of the rest. The same is true of debt. That sets two tasks for those who care about the health of the society: change the design, and find ways to cope as effectively with the failures it imposes. This valuable monograph by Strike Debt provides a good guide to undertake both.”
—Noam Chomsky, author of Hopes and Prospects

“The Debt Resisters’ Operations Manual is a powerful tool for resistance and creation. It shows how we can say ‘no!’ to debt—resist and refuse—at the same time it opens the possibility of alternative ways of relating and creating real value together, based on solidarity and care.”
—Marina Sitrin, author of Everyday Revolutions: Horizontalism and Autonomy in Argentina

“This Manual is a practical guide that will aid anyone who is struggling with debt. But even more important it is a political guide that illuminates the myriad kinds of debt relationships that define our society and helps us imagine how we can begin to organize collectively against debt.”
—Michael Hardt, author of Commonwealth

“The Debt Resisters’ Operation Manual is a sober, practical book that will save its readers much money and many sleepless nights. At the same time it is a visionary text that goes into the bowels of the debt machine to chart a collective way out of the state of debt-induced indentured servitude that millions of Americans face. Get a copy and join the movement.”
—Silvia Federici, author of Revolution at Point Zero: Housework, Reproduction, and Feminist Struggle

The Debt Resisters’ Operations Manual is a project of Strike Debt. Strike Debt is building a movement of debt resistance and liberation based on principles of anti-oppression, autonomy, democratic decision-making and direct action. Debt resistance can take many forms and Strike Debt is developing tactics, resources, and frameworks for expanding the fight against the debt system while developing alternative systems of mutual aid for the common good.

Strike Debt emerged out of thematic assemblies held in May 2012 in solidarity with the student strikes in Montreal. Occupy Theory, Occupy Student Debt Campaign, and Free University collaborated to hold an assembly on Education and Debt. Several weeks later, the group continued to meet under the name “Strike Debt.” Strike Debt quickly realized that organizing around all forms of debt provided much-needed energy and systematic analysis to the movement.

In addition to this manual, Strike Debt initiatives include launching the “Rolling Jubilee,” a mutual-aid project that buys debt at steeply discounted prices and then abolishes it; hosting debtors’ assemblies; and planning direct actions across the country, ranging from debt burnings to targeted shutdowns of predatory lenders. Each project is seen as a strike against the predatory debt system.