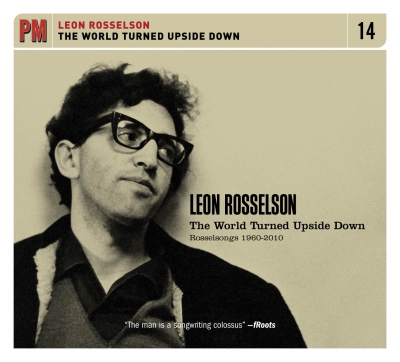 The World Turned Upside Down (CD)

Leon Rosselson
The life and times of England’s greatest living songwriter are captured in a deluxe box set containing 72 songs on 4 CDs and an 80-page book.

The life and times of England’s greatest living songwriter are captured in a deluxe box set, containing 72 songs on 4 CDs and an 80-page book.

“The songs on these CDs span 5 decades, from the sparky sixties to the curdled present, and encompass a wide variety of song subjects and song forms. They have been written out of hope, anger, love, scorn, laughter and despair. The tracks I have selected are, I believe, sturdily built and quite capable of standing up for themselves. And, because they have something to say about the times in which they were written, there are copious notes on the political and personal environments that formed them along with some pointed observations on the craft of songwriting.”  —Leon Rosselson

About the Artist:
Leon Rosselson has been at the forefront of songwriting in England for 50 years. His songs range from the lyrical to the satirical, from the personal to the political, from the humorous to the poignant. His best known song, “The World Turned Upside Down,” has been recorded by, amongst others, Dick Gaughan, John McCutcheon and Billy Bragg (who took it into the pop charts in 1985) and has been sung on numerous demonstrations in Britain and the U.S.