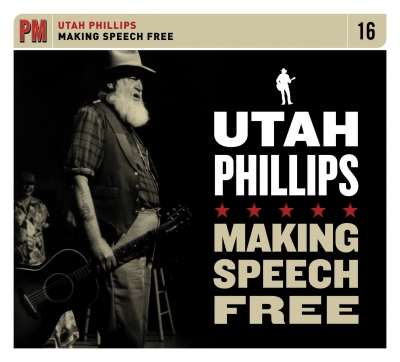 Utah Phillips
Stories, polemics, and rants from the Golden Voice of the Great Southwest.

“As it happened, most of my greatest teachers were or had been members of the Industrial Workers of the World, the Wobblies. That’s why I became one over forty years ago. These old Wobs showed me a way to get through the world without giving away my mind, body, and soul to a bunch of witless tyrants who only want cheap labor that can be thrown away when they don’t need it anymore. These songs weren’t learned from books or records, but from sitting in front of live people and saying, ‘Sing that again,’ until I finally got it. These stories, polemics, and rants grew out of years of asking questions, listening closely, and trying out what I heard on the world around me. I guess that part of growing up is finally deciding what you authentically inherit, what was it that was passed along to you by our elders. Then it’s our turn to keep it in the world by passing it along. So here it is. Some of it, anyway.” —Utah Phillips

Captured live on May 7, 1999, as part of a Free Speech Teach-In, the inestimable “Golden Voice of the Great Southwest,” delivers 74 minutes of his trademark history, humor, song, and struggle in a signature performance. Utah’s songs and stories remind us to “Don’t Mourn, Organize,” and that we can be inspired, educated, and entertained while we do it.

About Utah Phillips:
Utah Phillips (1935–2008) was a labor organizer, folk singer, storyteller, poet and the “Golden Voice of the Great Southwest.” He described the struggles of labor unions and the power of direct action, self-identifying as an anarchist. He often promoted the Industrial Workers of the World in his music, actions, and words.