View basket “Why Work?” has been added to your basket. 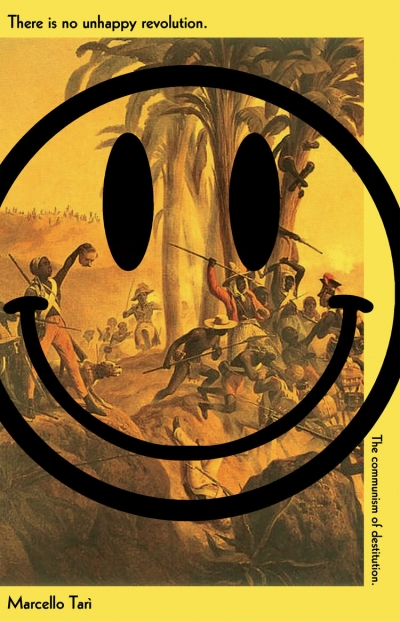 There is no Unhappy Revolution

The Communism of Destitution
In a era of ongoing political, economic, and climate crisis, Marcello Tarì reclaims the revolutionary task of making life worth living : )

In a era of ongoing political, economic, and climate crisis, Marcello Tarì reclaims the revolutionary task of making life worth living : )

Can we afford our collective unhappiness any longer? There Is No Unhappy Revolution gives expression to the age of revolution unfolding before us. With equal parts sophistication and raw urgency, Marcello Tarì identifies the original moments as well as the powerful disruptive and creative content haunting our times like a specter.

One hundred years after the October Revolution, amidst our current civilizational crisis, is it still possible to think and build communism? Yes, Tarì responds, provided we radically rethink the tradition of revolutionary movements that have followed one century to another.

Offering both a militant philosophy and a philosophy of militancy, he deftly confronts the different contemporary movements from the Argentinean insurrection of 2001 to Occupy Wall Street, the Spanish Indignados, the French movement against the labor law, and the Arab spring, resurrecting and renewing a destituent lineage of revolutionary thought, from Walter Benjamin to Giorgio Agamben, that promises to make life livable.

For centuries, each generation has found itself up against this unresolved yet unavoidable question. One might say revolutions arrive in the world at precisely the moment people begin to ask themselves this very question and, in dialogue with others, begin to develop some responses. This struggle, both worldly and spiritual, has given rise to extraordinarily audacious and adventurous experiments that—more often than not—end in defeat. It often happens that the struggle comes to an end because those who posed the question melt away. The cunning of history has always had the better of the scandal of truth. This is why Franz Kafka said that for revolutionary spiritual movements—which have always been movements running against the current of history—it is as if nothing has ever happened. Despite this, or perhaps because of it, the question arises again and again from the ruins of time—intact.

Having arrived at the end of a civilization (our own civilization, of course—who else’s would it be?), this line of questioning has acquired a new urgency. It can no longer be postponed, it feels even more rooted in current circumstances, and has become the silent reflection of an increasingly widespread disquiet. These are simple questions that have been repeated many times over in places very far away from each other. How to put an end to a form of rule that does not want to end? How to put an end to the poverty of an existence whose meaning escapes us every which way we turn? How to put an end to this present moment, in which the architectural plan seems to map out a prison cell so vast as to contain entire populations? How to put an end to a catastrophe that can no longer extend any further because it is already everywhere and has even begun to dig down beneath the feet of the angel of history? Last but not least: how do we shift the axis of the world to align it along the abscissa of happiness? The answer cannot be separated from the question, and for this reason, it must remain at a standstill but also utilizable by anyone who feels it arising within them. The true doctrine consists only of questions, as the historians of the Kabbalah know all too well. The answer is inscribed within existence itself, at the moment in which all of existence collides with the question.

In our own times, however, it seems as if our tired old world itself is interrogating us, before it gives up and takes its leave from the stage. It is tired because all possibilities have been exhausted. From now on, it is only the impossible that counts. When history approaches its end, it becomes far too heavy to bear. Indeed, for some time now, history’s progression has meant only the intensification of its catastrophe. Buried under the mountains of the rubble of progress, the truth is that there has never been a single world (i.e., that of our present moment, closed within the quaternity of West- Modernity-Democracy-Capitalism) but an Earth that has never stopped mutating into a multiplicity of worlds seemingly unified through their divisions and hierarchies according to cybernetics, capital, metaphysics, and spectacle.

Until recently, there was the possibility (even if a subaltern one) of naming this plurality of worlds. But the current world, which presents itself as the one and only unity of meaning, canceled out even the modern definitions of the second, third, and fourth worlds from the ruling discourse—exactly as it did for class. There is only one world, the world of capital, and only one class: the planetary bourgeoisie. And yet it is precisely that single world, that concrete abstraction negating the existence of all other worlds—in a word, “civilization”—that is falling apart under the weight of its own catastrophic triumph. The gamble taken by revolutionaries is to transform this collapse, this triumphant catastrophe, this impossibility, into the redemption of all the other worlds. Winning out over that single world because it collapses in ruin across all humanity is, fundamentally, the only logical way to confront the West’s insane desire for the apocalypse.

Revolutionaries are activists of endtimes. They operate within this temporality, working towards the actualization of a profane happiness—but they must always bear in mind that the exhaustion of possibility in this world also means exhausting the political activity that goes along with it. A political identity that, just like this world itself, has exhausted every possibility, that has to be laid aside if it does not want to continue its existence as the undead, a zombie. In order to grasp hold of the impossible, it seems, therefore, that the precious form of life, the mask, that has been represented by modern revolutionary militancy must undergo some change—a form that now survives only as a memory, reduced to tatters, fragments, and ruins. The historical ontology of this event has yet to be undertaken. This is one of the reasons our own relation to this form of activism remains that of unresolved mourning. The blackhooded sweatshirt, now a standard presence at every demonstration in which something actually happens, seems to be there precisely to remind everyone else on the march that it exists.