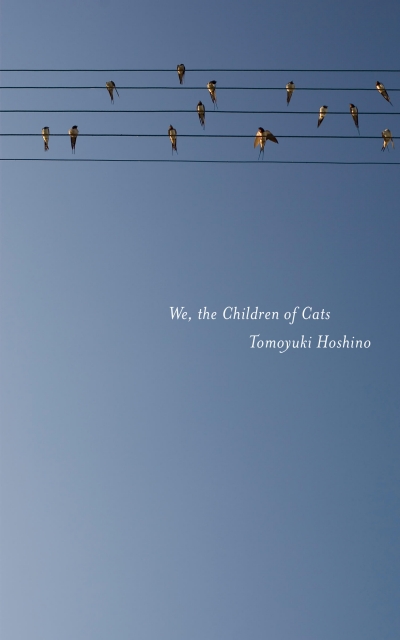 We, the Children of Cats

A man and woman find their genders and sexualities brought radically into question when their bodies sprout new parts, seemingly out of thin air.

A man and woman find their genders and sexualities brought radically into question when their bodies sprout new parts, seemingly out of thin air…. A man travels from Japan to Latin America in search of revolutionary purpose and finds much more than he bargains for…. A journalist investigates a poisoning at an elementary school and gets lost in an underworld of buried crimes, secret societies, and haunted forests…. Two young killers, exiled from Japan, find a new beginning as resistance fighters in Peru….

These are but a few of the stories told in We, the Children of Cats, a new collection of provocative early works by Tomoyuki Hoshino, winner of the 2011 Kenzaburo Oe Award in Literature and author of the powerhouse novel Lonely Hearts Killer (PM Press, 2009). Drawing on sources as diverse as Borges, Nabokov, Garcia-Marquez, Kenji Nakagami and traditional Japanese folklore, Hoshino creates a challenging, slyly subversive literary world all his own. By turns teasing and terrifying, laconic and luminous, the stories in this anthology demonstrate Hoshino’s view of literature as “an art that wavers, like a heat shimmer, between joy at the prospect of becoming something else and despair at knowing that such a transformation is ultimately impossible…a novel’s words trace the pattern of scars left by the struggle between these two feelings.” Blending an uncompromising ethical vision with exuberant, freewheeling imagery and bracing formal experimentation, the five short stories and three novellas included in We, the Children of Cats show the full range and force of Hoshino’s imagination; the anthology also includes an afterword by translator and editor Brian Bergstrom and a new preface by Hoshino himself.

About Tomoyuki Hoshino:
Born in Los Angeles in 1965, Tomoyuki Hoshino returned to Japan with his family before his third birthday and spent the next twenty-three years living in the greater Tokyo-Yokohama area. After graduating with a degree in literature from Waseda University in 1988, he worked for two years as a journalist for the conservative Sankei newspaper. He left that job and Japan to study abroad in Mexico from 1991-92. After briefly returning to Japan, he received a Mexican government scholarship and resumed his studies in Mexico, where he stayed until August of 1995. From 1996-2000, he tried his hand at writing subtitles for Latin American and Spanish films.

About Brian Bergstrom (translation):
Brian Bergstrom is a PhD candidate in East Asian languages and civilizations at the University of Chicago and a Sessional Lecturer at McGill University in Montréal. He is completing a dissertation examining representations of youthful criminals in Japanese literature and popular culture. In addition to his work with Hoshino, he has published articles on the proletarian woman writer Takako Nakamoto and the contemporary Gothic Lolita novelist Novala Takemoto.

About Lucy Fraser (translation):
Lucy Fraser is a PhD candidate at The University of Queensland, Australia, researching gender and fairy tale revisions in contemporary Japanese and English texts. Her other translations include an interview with shōjo manga writer Sakumi Yoshino, literary criticism by Masuko Honda and Kenko Kawasaki, song lyrics, and literary news.