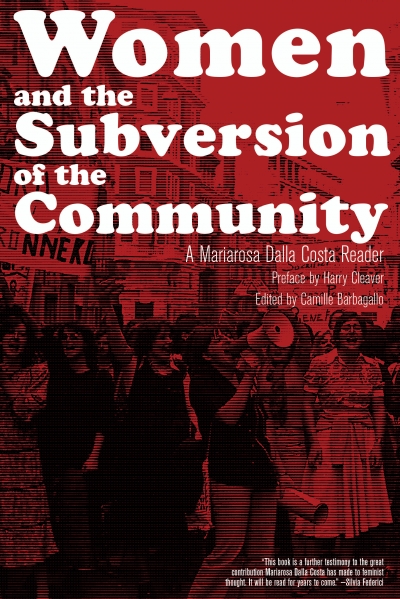 Women and the Subversion of the Community

A Mariarosa Dalla Costa Reader
Preface: Harry Cleaver • Editor: Camille Barbagallo
These essays provide critical and relevant ideas for anticapitalists, antiracists, and feminists who are attempting to build counterpower in the age of austerity.

This collection brings together key texts and previously unavailable essays of the influential Italian feminist author and activist Mariarosa Dalla Costa. In recent years there has been both a renewed interest in theories of social reproduction and an explosion of women’s struggles and strikes across the world. The collection offers both historical and contemporary Marxist feminist analysis of how the reproduction of labour and life functions under capitalism.

Dalla Costa’s essays, speeches, and political interventions provide insight into the vibrant and combative women’s movement that emerged in Italy and across the world in the early 1970s. Since the publication of Women and the Subversion of the Community (1972), Dalla Costa has been a central figure in the development of autonomist thought in a wide range of anticapitalist and feminist social movements. Her detailed research and provocative thinking deepens our understanding of the role of women’s struggles for autonomy and control over their bodies and labour. These essays provide critical and relevant ideas for anticapitalists, antiracists, and feminists who are attempting to build counterpower in the age of austerity.