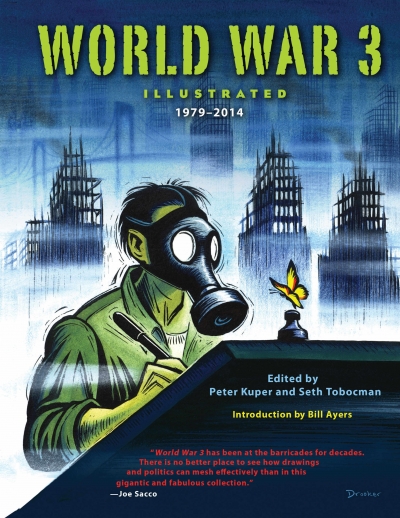 Founded in 1979, World War 3 Illustrated is a collective of artists and activists working with the unified goal of creating a home for political comics, graphics, and stirring personal stories.

Founded in 1979 by Seth Tobocman and Peter Kuper, World War 3 Illustrated is a labor of love run by a collective of artists (both first-timers and established professionals) and political activists working with the unified goal of creating a home for political comics, graphics, and stirring personal stories. Their confrontational comics shine a little reality on the fantasy world of the American kleptocracy, and have inspired the developing popularity and recognition of comics as a respected art form.

This full-color retrospective exhibition is arranged thematically, including housing rights, feminism, environmental issues, religion, police brutality, globalization, and depictions of conflicts from the Middle East to the Midwest. World War 3 Illustrated isn’t about a war that may happen; it’s about the ongoing wars being waged around the world and on our very own doorsteps. World War 3 Illustrated also illuminates the war we wage on each other—and sometimes the one taking place in our own minds. World War 3 artists have been covering the topics that matter for over 30 years, and they’re just getting warmed up.

“World War 3 Illustrated is the real thing. . . . As always it mixes newcomers and veterans, emphasizes content over style (but has plenty of style), keeps that content accessible and critical, and pays its printers and distributors but no one else. If it had nothing more than that kind of dedication to recommend it, it would be invaluable. But it has much, much more.“
—New York Times

“Reading WW3 is both a cleansing and an enraging experience. The graphics remind us how very serious the problems and how vile the institutions that cause them really are.“
—Utne Reader

“Powerful graphic art and comic strips from the engaged and enraged pens of urban artists. The subjects include poverty, war, homelessness and drugs; it’s a poke in the eye from the dark side of America, tempered by what the artists describe as their ’oppositional optimism.’“
—Whole Earth Review

“This is art—not marketing—on the newsstand. It represents the sort of creativity too rarely given an outlet in comics. It’s the best and longest running alternative comics anthology around.“
—Comics Journal

“The artists of World War 3 have forged a space by turns harsh and exciting, honest and rowdy, boisterous and straight-forward, always powered by the wild and unruly harmonies of love. It’s a space where hope and history rhyme, where joy and justice meet. Their voices provoke and soothe and energize. I want to hear more.“
—Bill Ayers, founder of the Weather Underground

Peter Kuper is the cofounder of World War 3 Illustrated. His illustrations and comics have been featured in Time, The New York Times, and MAD Magazine, for which he has written and illustrated SPY vs SPY since 1997. He has produced over 20 books including The System, a Will Eisner Comic Industry Award Nominee, Drawn to New York: An Illustrated Chronicle of Three Decades in New York City, and Diario De Oaxaca, a visual journal of two years in Mexico. He was the 2009 gold medal recipient at the Society of Illustrators for sequential art.

Seth Tobocman is the cofounder of World War 3 Illustrated. He is the author and illustrator of five graphic books, including You Don’t Have to Fuck People Over to Survive, Portraits of Israelis and Palestinians, and Understanding the Crash. He has participated in exhibitions at ABC No Rio, Exit Art, the Museum of Modern Art, and the New Museum of Contemporary Art. His illustrations have appeared in the The New York Times among many other publications.

Bill Ayers is a professor of education at the University of Illinois at Chicago (UIC), and founder of both the Small Schools Workshop and the Center for Youth and Society. Ayers has written extensively about social justice, democracy and education, the cultural contexts of schooling, and teaching as an essentially intellectual, ethical, and political enterprise. He is vice president of the curriculum division of the American Educational Research Association, and a member of the executive committee of the UIC Faculty Senate. He lives in Hyde Park, Chicago with his wife, Bernardine Dohrn.