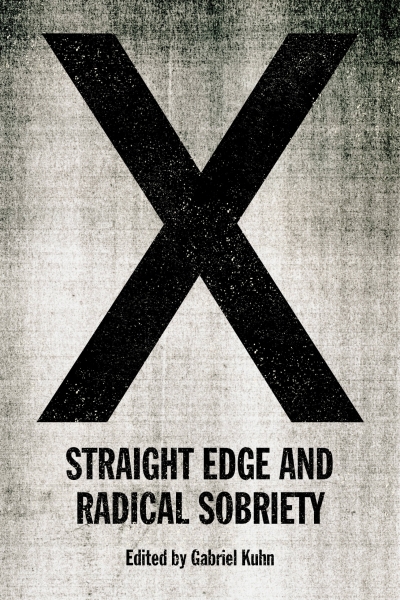 written by Gabriel Kuhn
The highly anticipated follow up to the critically acclaimed Sober Living for the Revolution continues the reconnaissance of straight edge culture and how it overlaps with radical politics.

Straight edge—hardcore punk’s drug-free offshoot—has thrived as a subculture since the early 1980s. Its influence has reached far beyond musical genres and subcultural divides. Today it is more diverse and richly complex than ever, and in the past decade alcohol and drug use have become a much-discussed issue in radical politics, not least due to the hard work, dedication, and commitment to social and environmental justice found among straight-edge activists.

X: Straight Edge and Radical Sobriety is Gabriel Kuhn’s highly anticipated follow-up to his critically acclaimed Sober Living for the Revolution. In this impressive volume, Kuhn continues his reconnaissance of straight-edge culture and how it overlaps with radical politics. Extensively illustrated and combining original interviews and essays with manifestos and reprints from zines and pamphlets, X is a vital portrait of the wide spectrum of people who define straight-edge culture today.

In the sprawling scope of this book, the notion of straight edge as a bastion of white, middle-class, cis males is openly confronted and boldly challenged by dozens of contributors who span five continents. X takes a piercing look at religion, identity, feminism, aesthetics, harm reduction, and much more. It is both a call to action and an elaborate redefinition of straight edge and radical sobriety.

Promising to inspire discussion, reflection, and unearth hidden chapters of hardcore punk history, X: Straight Edge and Radical Sobriety is of crucial importance to anybody interested in the politics of punk and social transformation.

About the Author:
Gabriel Kuhn lives as an independent author and translator in Stockholm, Sweden. He is the editor of Sober Living for the Revolution: Hardcore Punk, Straight Edge, and Radical Politics (2010); Antifascism, Sports, Sobriety: Forging a Militant Working-Class Culture (2017); and several other PM Press books. He has been straight edge for thirty years.