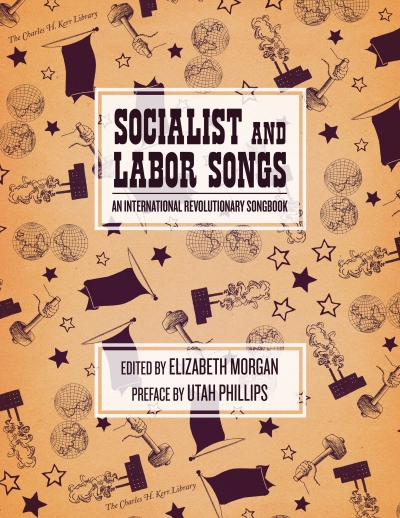 Seventy-seven songs, with words and sheet music, of solidarity, revolt, humor, and revolution. Compiled from several generations in America, and from around the world.

Seventy-seven songs—with words and sheet music—of solidarity, revolt, humor, and revolution. Compiled from several generations in America, and from around the world, they were originally written in English, Danish, French, German, Italian, Spanish, Russian, and Yiddish.

“I’ve always known our political and social movements as singing movements, and have been continually astonished at the scope and variety of our people’s music… These songs are like endangered species that have been restored to the present, to the land of the living. They stuck up for us long ago during dark and troubled times. Our times are dark and troubled, too, but our old songs are still here with us to see us through. Sing away!” —Utah Phillips

Elizabeth Morgan—a longtime socialist activist (including running for Congress in Ohio on the Socialist ticket), accomplished musician, and progressive educator (founding the Arthur Morgan School)—compiled this songbook over a period of many years, completing it in 1958. It was published for the first time in 1997 by the Charles H. Kerr Company.

Utah Phillips (1935–2008) was a labor organizer, folk singer, storyteller, poet, and the “Golden Voice of the Great Southwest.” He described the struggles of labor unions and the power of direct action, self-identifying as an anarchist. He often promoted the Industrial Workers of the World in his music, actions, and words.

Check out book reviews, and other news on the Editor’s Page HERE
Click here for one-page information sheet on this product